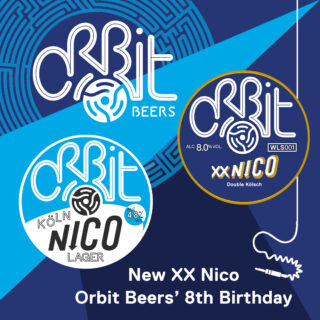 • Orbit Beers are celebrating the brewery’s eighth birthday on Saturday 2nd July at their brewery and taproom in Walworth, South London.

• The Double Kölsch was the first ‘White Label Series’ beer ever produced by Orbit Beers in 2016 – WLS001, so they’re bringing it back to celebrate their birthday this year.

On 2nd July 2022, Orbit Beers is celebrating its 8th Birthday at the brewery and taproom in Walworth, South London. Established in South London in 2014, Orbit Beers are deeply rooted in European brewing traditions with a modern approach. They take classic styles and make them their own, with an eye for finesse and drinkability. The celebrations will focus on Orbit’s award-winning flagship Lager Nico and will include a freshly brewed batch on tap along with the release of their barrel-aged Nico Cuvée de Cologne 2022. In addition to this, a new limited edition Double Kölsch XX Nico will be released on the day. In true Orbit Beers style, they’ll have DJs playing, and a delicious menu lined up from resident chef @lightninhotthings.

“We are so happy to be celebrating our 8th year in the same site under the railway arches in Walworth. Having made it through the pandemic as a team and managed to double the size of our brewery earlier this year, this is an exciting time for Orbit Beers, and we want to celebrate with the community that have supported us throughout.” Robert Middleton, Founder of Orbit Beers.

Free to attend. To book a table at the taproom for Saturday 2nd July, visit: http://www.orbitbeers.com/bookings/

Orbit Beers bring a modern approach to European traditions. Taking classic styles and making them their own, with elements of finesse and drinkability.

Orbit’s award-winning Nico Köln Lager is typical of a Cologne Kölsch and is named after musician Christa Päffgen under her singing alias Nico, who hailed from Cologne, the city of Kölsch.

Nico offers a delicate balance of malt and hops that is synonymous with the Kölsch style, and a soft bitterness with a crisp, thirst-quenching, dry finish. Look for green apple and pear drop notes from the distinctive Kölsch yeast. Awards:

The Double Kölsch was the first White Label Series Beer Orbit produced back in January 2016. With their 8 th Birthday coming up this July, they decided to brew this one again to celebrate, coming in at 8%!

Fans of Nico will enjoy this extra-strength Kölsch with its pale golden colour and fluffy white head. Aromas of cereal malts with subtle notes of pear, green apple, and herbal hops. Expect to taste a smooth, malty sweetness, balanced bitterness, and a hint of boozy warmth with a long, crisp finish.

A brewer’s choice blend of complex, oak barrel-aged Nico, this super limited release is an annual treat among Orbit drinkers!

Every year Orbit Brewers barrel age a small portion of Nico in a solera system, leaving it to ferment with some wild yeasts as well as specially selected strains of Brettanomyces.

When they fill the barrels with freshly fermented Nico, they do so on top of a small portion of BA Nico left behind from the previous year’s incarnation. This annual process allows the Cuvée de Cologne to change and develop year on year, whilst retaining links to Nico – the base beer, and previous releases of Cuvée de Cologne.

From the 2022 batch, you can expect aromas of toasted hay, oaky vanilla, and a subtle funk of lemon sherbet. Smooth bready malt flavours with retrained bitterness, delicate acidity, and a champagne-like dry finish.

To accompany the birthday celebrations, Orbit Beers will be releasing a Birthday Beer Box, available exclusively on their webshop. RRP £38 plus delivery (free delivery over £70).

Released & live on the web shop on 1st July 2022: https://orbitbeers.shop/products/mixed-case-nico-birthday-box –

Established in South London in 2014, Orbit Beers are deeply rooted in European brewing traditions with a modern approach. They take classic styles and make them their own, with an eye for finesse and drinkability. They love the incredible balance of German beers and the complexity of flavours that Belgian yeasts produce.

They love hops, the spicy elegance of classic European ones, the zesty aromas of New Zealand varieties, and the fruity extremes of their American counterparts.

Orbit’s work is inspired by the ethos of their favourite record labels, who hold music and art above all else. Likewise, Orbit Beers accept no compromises when it comes to making their beer.

In 2012, Orbit Beers Founder, Robert (or ‘Orbit’ as he is otherwise known), set off on a journey in his campervan (named Brian). His mission was clear: to discover beer in the land of whisky!

This expedition took him (and Brian) to every single brewery in his native Scotland, from the northernmost island in Shetland to the Outer Hebrides, the Scottish Borders and even his hometown of Dundee. The result was an overwhelming appreciation for traditional, European beer styles, balanced & complex flavours, and simple ingredients. That, and a burning desire to return to London and create Orbit Beers.

Back in the days when Robert was nicknamed Orbit, one of his earliest memories is his sister’s collection of vinyl records. In particular, the distinctive designs of the spindle adaptors, stacked above the turntable, ready to play.

Robert’s lifelong love of vinyl and independent labels has always been at the heart of Orbit Beers, with the spindle adaptor forming the Orbit Beers logo and quality music influencing their brews. From the ‘White Label Series’ of experimental beers to the core range named with musical influence; Nico (of the Velvet Underground), Ivo (Ivo Watts-Russel, Founder of 4ad records), Peel (John Peel), and Dead Wax (Run-out wax on vinyl records).

Having moved into our double railway arch in Walworth, South London in 2014, all their beers have been brewed and packaged on-site, which has now expanded into the arches next door to include the brewery taproom.