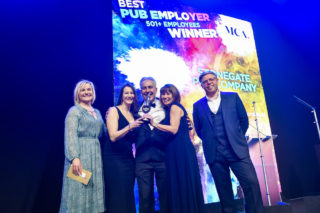 The award marked the second round of accolades the company has received in two days after it scooped Best Pub Employer (501+ employees) for the third time at the Publican Awards on Wednesday night.

The Best New Wellbeing Strategy award recognises businesses that have successfully implemented the first phases of a wellbeing strategy within the last two years. Stonegate was commended for its dedication to the career progression of its employees, its culture of recognition and reward, as well as its numerous programmes designed to enhance the employee experience. The pubco beat off, amongst others, TUI and HSBC who were also shortlisted for this category.

Notable schemes from Stonegate included Wagestream, which allows hourly paid employees to access to up to 30% of their earned wages at any point during the pay-cycle easing the pressure of financial stress, and the Employee Assistant Program, which sees Stonegate partner with the hospitality industry’s Licensed Trade Charity, to support employees in a wide-ranging, confidential and easily accessible way – ranging from mental health and general health to housing, relationships, education and training.

Suzanne Haydon said: “It is such an honour to be recognised for the work we have done for our employees at such a prestigious awards ceremony. We are dedicated to delivering the best possible working experience to all of our staff and we want to keep building on those pillars of support we are already offering.

“This year has already seen us enhance our Maternity and Paternity Leave policy, as well as include adoption and IVF treatment under that umbrella, introduce a long-service recognition scheme and from 1 April, we will also be offering two weeks of bereavement leave at full pay for all employees who lose a close family member.

“Stonegate is a company built on its people and we fully intend to show that same loyalty and commitment to our staff, as they show to our business.”

Chief Executive Simon Longbottom said: “The last year has been incredible for Stonegate. We have continued to grow the business through acquisition and market consolidation, investing in our people and our sites to enable them to deliver consistent sales and profit growth outperforming the market.

“It is testament to the calibre, dedication and hard work of our teams within the business that peers and industry experts recognise Stonegate in this way.”

These latest awards follow on from a phenomenal 2019 when Stonegate picked up a total of 16 industry awards, six of which were secured by its chairman and chief executive. Unquestionably a pub industry icon, chairman Ian Payne MBE was officially recognised as such last year, picking up the CGA Peach Industry Icon accolade[1] and an Icon Award[2]. He also received a Lifetime Achievement Award[3] for his contribution to the pub industry. Meanwhile, CEO Simon Longbottom, was declared Industry Leader of the Year[4], Business Leader of the Year[5] (a title which Payne claimed in 2014) and a 2019 Maserati 100 business innovator.

Following the acquisition of Ei Group on 3rd March 2020 for £1.27bn, Stonegate Pub Company is the largest pub company in the UK.  It’s portfolio is comprised of 1270 sites within the managed division and 3457 leased and tenanted businesses.

The managed pubs division, which employs 17,000 people, is split into Branded and Traditional pubs. Branded is comprised of: Slug & Lettuce, Walkabout, Be At One and Venues. Traditional (unbranded) pubs is made up of: Proper Pubs, Town Pub & Kitchen, Classic Inns, Common Room, Craft Union and Bermondsey Pub Group.