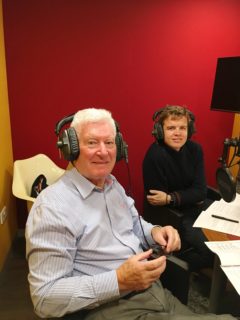 Ahead of Alcohol Awareness Week (19 – 25 November), alcohol education charity Drinkaware is focusing on the link between alcohol and heart problems, with support from comedian Roy Walker of TV’s Catchphrase fame, whose radio interviews on the topic will have reached a total of 15 million people by the end of next week.

Evidence from the Drinkaware Monitor 2018, a comprehensive analysis of the UK population’s drinking habits from Drinkaware and YouGov, has found that almost one third (31%) of UK drinkers do not recognise the link between alcohol and heart problems. Worryingly, 70% of people drinking at increasing and higher risk levels are aware of the link but are continuing to drink at these levels.[1]

The charity is urging people to assess their drinking and make simple changes, like taking several Drink Free Days each week, to reduce the amount they drink and improve their heart health.

Commenting on the findings, Drinkaware Chief Executive, Elaine Hindal, said: “Heart disease kills nearly 160,000 men and women every year in the UK but this survey shows that too many people do not recognise the link between alcohol and heart problems.[2]

“It is also deeply concerning that those who are drinking at increasing and higher risk levels are aware of the link but are continuing to drink in harmful ways.

“Whilst there are some studies showing that drinking alcohol can have a protective effect in certain cases, everyone needs to be aware that drinking alcohol over the Chief Medical Officers’ low risk drinking guidelines of 14 units a week raises the risk of developing heart problems, and that the more alcohol they drink, the greater the risk.”

“Cutting back on alcohol by taking more Drink Free Days each week can improve overall health and reduce the risk of developing heart problems.

“The more you cut back, the greater the benefit, and to keep health risks from alcohol to a low level, it is safest not to drink more than 14 units a week on a regular basis.

“Alcohol Awareness Week is a great opportunity for us all to look at our drinking habits and make changes that can vastly improve our health and wellbeing. “

Roy Walker said, “A glass of wine here or a bottle of beer there might not seem like much but the units can add up.  And as the units add up so do the risks of liver disease, some types of cancer, heart disease, high blood pressure and stroke.

“The simple fact is that the more alcohol we drink, the greater the risks to our health.

“A simple and easily achievable way of reducing the risk is by having more drink free days and Drinkaware has a wide range of tools and resources available to help.”

Drinkaware has more than 120 funders, including UK alcohol producers, retailers in the on-trade and off-trade and wholesalers.