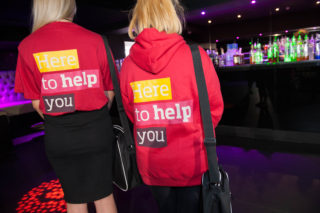 Drinkaware is relaunching its successful Drinkaware Crew scheme with a new name – Nightlife Crew – and a new structure that includes five different training offers to extend the scheme into a wider range of environments.

Hackney and Cardiff have become the first local areas to sign up for Nightlife Crew. Drinkaware is expecting more local authorities, BIDs (Business Improvement District) and others with responsibility for night-time safety to adopt the training over the coming months.

The relaunch follows a thorough evaluation of the scheme, which was launched in 2015 and has so far been activated in clubs and bars in 21 areas across the country, including Birmingham, Bristol, Glasgow and Nottingham. It has also been informed by Drinkaware’s activity at festivals, such as British Summer Time, and on the streets, like those in Soho, where the original training has been successfully adapted to promote customer safety.

Nightlife Crew is being offered to local authorities and BIDs, through a ‘train the trainer’ course delivered by Drinkaware. Delegates who successfully complete the course are then accredited by Drinkaware to deliver the training in their areas, incorporating it into their existing night-time safety initiatives.

Nightlife Crew is available as a complete package of five training modules:

Drinkaware will continue to offer its e-learning course, now called Support Crew, direct to pub, bar and club operators wanting to ensure that all their staff selling alcohol are trained to identify and deal with alcohol-related vulnerability.

Brett Crabtree, Head of Business Development at Drinkaware, said: “We’ve already seen our night-time safety scheme help so many people to have a safer, more positive night out, and we’re grateful to the many partners who have made it such a success.

“We’re enormously proud to see the training evolve into what is now Nightlife Crew.

“We’re delighted to have secured Hackney and Cardiff as our first partners and are looking forward to seeing Nightlife Crew roll out across the country. We would urge all local authorities, BIDs and others with a night-time safety remit to look at how Nightlife Crew can help to promote their local area as one that people can visit for an enjoyable evening – without the risk of alcohol harms.”

Adrian Field, Executive Director at FOR Cardiff, said: “We are proud that Cardiff’s nightlife has so much to offer. Our aim is always to ensure the public experience Cardiff at its best by promoting the city as a safe environment where you can have a memorable night out. We’re delighted to be rolling out Drinkaware’s Nightlife Crew training in venues across the city. The Nightlife Crew training gives venues the confidence that their staff are fully aware of how to support customers, thereby giving them room to provide quality, safe service as well as a great time.”

Samantha Mathys, Hackney Council’s Late Night Levy Manager, said: “We’re really excited to be rolling out Nightlife Crew at the beginning of 2020 to venues across the borough. The training will form part of Hackney Nights, our night-time safety charter, which will encompass and deliver a variety of training modules for venues and public advice on safety-related issues throughout the night-time economy.

“So alongside the training, our Charter will include public awareness campaigns on night-time safety and resources for local licensed premises, funded by Hackney’s Late Night Levy, which is paid for by local late-night licensed venues to contribute towards policing and the management of night-time economy areas.

“In addition to licensee training and resources and our public awareness campaigns, the Late Night Levy is also funding extra police presence on the ground. These are just some of the ways our Late Night Levy is helping to promote a safer night-time economy and protect local residents, visitors and licensees from crime and antisocial behaviour.

“Drinkaware’s training is another layer to Hackney Nights, and we are sure that it will empower venues with the tools they need to help support their customers on nights out.”

The night-time training from Drinkaware has made an impact in a number of venues, including larger clubs and bars. In what will now be known as Club Crew, dedicated, specially-trained team members circulate inside the venue, promoting a more positive atmosphere and supporting customers where needed – reuniting them with lost friends or helping them get home. In research at nine venues operating the scheme1, four out of five customers said they felt more positive about a venue with Crew in place. Three in four would be willing to pay £1 more for entry if a venue offered Drinkaware’s Crew scheme.

Last Christmas, Westminster City Council launched its Soho Angels night-time safety scheme, for which Drinkaware provides training to its large group of volunteers. The scheme, which runs in partnership with the LGBT Foundation and is supported by Smirnoff, runs every weekend, and collaborates with St John Ambulance as well as the local police and ambulance services. Volunteers, who join the scheme from all ages and backgrounds, receive the Drinkaware-based training to help people on a night out to ‘end the night well’. The training includes everything from how to approach someone who is drunk to how to spot someone with alcohol poisoning. In just a year the Soho Angels have helped hundreds of people get home safely, prevented ‘blue light’ incidents and even saved lives.

To find out more about Night Life Crew, contact drinkawarecrew@drinkaware.co.uk

Drinkaware has more than 130 funders, including UK alcohol producers, retailers in the on-trade and off-trade and wholesalers.