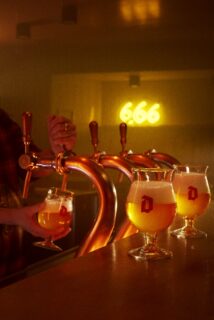 Duvel 6,66% has a lower carbon dioxide content than the iconic Duvel 8.5%, and can be tapped from a regular draught line.  This will make Duvel 6,66% a straightforward addition to any bar and a great draw for experimenters and those in love with Duvel’s signature house style.

This newest variant of Duvel (or ‘Devil’ in Dutch) has been created to celebrate the Moortgat family’s 150th anniversary in brewing.

UK General Manager, Steven Behan comments: “The UK will be one of the first countries in the world to launch Duvel 6,66% on draught, which is a proud moment for our team who are all raring to support the re-opening of the UK hospitality industry. The Duvel 6,66% launch explores the many good reasons to enjoy this new beer, and what better reason is there to raise a glass of fine Belgian beer than the re-opening of your local?”

Unveiled globally in bottle earlier in 2021, Duvel 6,66% is already receiving an enthusiastic response. It is a deliciously drinkable brew with a heavenly, mellow taste that is gently aromatic and refreshingly fruity, before ending with a typical Duvel punch.

Duvel 6,66% abv is sibling to the iconic Duvel 8.5% abv blond ale launched in 1970, and to the fragrant Duvel Tripel Hop Citra 9.5% abv, which became a permanent feature in the Duvel Moortgat portfolio in 2017. All three Duvel beers use the same Scottish yeast strain as included in the family’s ales since the 1920’s.

Craig Finn, Owner and Co-Founder of TripelB, Worcester’s first and only dedicated Belgian beer café, comments: “We’re really excited about serving Duvel 6,66% on draught, as much for us as for our customers. We never get anything short of a high quality and delicious brew from Duvel Moortgat and we’re thrilled to be drinking a beer that helps celebrate Duvel’s 150 years of brewing.  Our customers have been asking about Duvel 6,66% over lockdown so there’s already enthusiasm and anticipation out there.”

Style: Belgian Blond Ale, with refermentation in the bottle

Colour: A blond beer with an attractive, natural cloudiness

Aroma: Aromatic beer with a full-bodied, mild finish.  With lively and fruity aromas thanks to the use of orange zest and dry hopping.

Duvel 6,66% is available to the UK on-trade now and already listed online at BeerHunter.co.uk and TheBelgianBeerCompany.com.

Duvel 6,66% is available in bottle and on-draught in more than 20 countries, catering establishments, retailers and supermarkets in Europe and China, and during 2021 to countries such as Canada and South Africa.

Press release from R&R Teamwork on behalf of Duvel Moortgat