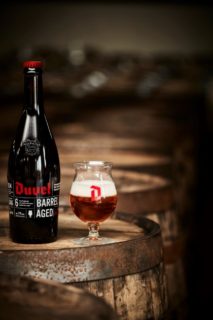 Duvel Moortgat UK, the family owned Belgian brewer of so many iconic brands, has launched small quantities of Duvel Barrel-Aged No:3 into the UK market.

After a first fermentation and lagering in Duvel’s tanks, Duvel Barrel-Aged No:3 rests and ages in American oak casks for an average of six months. The barrels have been used once before for maturing Bourbon, a process that generally takes six years.

The oak barrels have been charred on the inside and so provide a range of aromas, including vanilla as the strongest note.  Additionally, the wood has been infused by its original contents – bourbon (at least seven litres per wooden barrel) – and this naturally creates the ensuing bourbon and caramel flavours in Duvel Barrel-Aged.

Duvel Barrel-Aged is brewed with pale barley malts, with Saaz and Styrian Goldings hops as per the classic Duvel, and it is 11.5% abv against Duvel’s 8.5% abv. There is no further conditioning in the bottle and it can be stored for up to 5 years.

Duvel Barrel-Aged No:3 is copper-coloured, significantly redder-brown than Duvel’s blonde coiffure, with a rich white head and Duvel’s signature small bubbles.  It has powerful hints of Bourbon, vanilla and caramel from the oak barrels, and is less bitter than Duvel as the wood itself naturally removes some of the bitterness of the beer.  It shows spice, rose petals, pear drops and apple, with a warming, dry finish.  The recommended serve is at 8°C, three degrees warmer than Duvel.

Available in limited batches, due to the time dedicated to brewing and ageing, Duvel has used 351 barrels for this third batch of Barrel-Aged, generating 79,092 bottles. The first batch was 100 barrels; and the second was 193.  In the future, Hedwig Neven might consider whisky or sherry barrels to deliver different flavour profiles.

John Wood, General Manager of Duvel Moortgat UK comments: “Duvel Barrel-Aged was first brewed in 2017 and was a big success not just in its home market of Belgium, but also in France and the Netherlands.  It’s impossible to predict exactly how long it will take for the beer to absorb the aromas of the wood in the barrels, and this adds to the interest and enthusiasm for the brew.  This is a beer that demonstrates a wonderfully exotic palette of flavours, and suits a wide range of characterful foods, whilst ageing gracefully in bottle.”

Duvel Barrel-Aged is available to the trade via James Clay or to consumers through Bottle Shop of London.

The Bottle Shop’s owner Andrew Morgan comments: “It is amazing that breweries the size of Duvel have such a desire to innovate, whether it was with their series of Tripel Hop beers in the past, or with their barrel-aging programme now.  They’re prepared to subvert the market; previously selling (and selling-out) the Barrel-Aged No:3 at €25 for a 750ml bottle in Belgian supermarkets to demonstrate their confidence that not all beers are born equal.  It is on the shelf at our BottleShop: Bermondsey store at £20 a bottle (and online at www.bottle.shop) and is well worth every penny.”

Duvel’s barrel-ageing process contrasts with the production of some ‘oaked’ beers, which can imitate or accelerate the oak process by adding wood chips to the stainless-steel lagering tanks, or by adding wood flavouring.