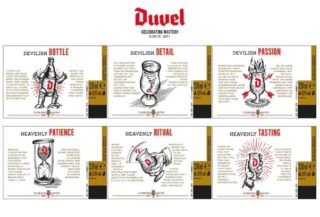 All six of them will be available in both the off-trade and on.

Each label provides the beer drinker with uplifting details of the Duvel brand and its ethos, as delivered daily during the immersive tours of their historic brewery at Breendonk, north of Brussels.

“For many beers, brewed at normal carbonation levels, the pour of a beer by bottle is not so vital. But Duvel is a living, un-pasteurised beer. Its carbonation is a thing of legend, and its worldwide-renowned 90-day brewing process – with the extra six weeks of cold storage – delivers a more than exuberant head.  This makes knowledge of the beer, and of its pouring ritual, really critical.

So, we have decided to use the spare canvas, which is the back label, to add extra interest for Duvel drinkers in six different treatments”.

The six new ‘Mastery’ labels are:

First brewed in the 1920s to commemorate the end of the First World War, Duvel was initially named “Victory Ale”. The First World War brought Belgium into contact with England – and English ales, in particular. Inspired by the success of English ales, Albert Moortgat, the founder’s son, decided to create a special beer based on the English model. After five years of experimentation – and an odyssey to Scotland to find a specific yeast strain – Victory Ale was born. (Duvel is still brewed with yeast cultured from the very same strain to this day.)

At a tasting session for local notables, the shoemaker, Mr. Van De Wouwer was so amazed by the beer’s potent aromas that he exclaimed, “This is a real devil” – or “Duvel” in Flemish. Since then, the name was changed from Victory Ale and the beer has henceforth been known as Duvel.

Convinced that a unique beer needed a unique glass, the third generation of Moortgats designed the first tulip-shaped beer glass just for Duvel. The innovative glass had to be able to hold the contents of an entire 33cl bottle. (Up until then, there had never been such a large beer glass!) The glass is specifically designed to offer a more complete experience of the beer: the rounded shape allows Duvel’s exquisite flavour and aroma to be fully experienced by the drinker and the way the glass narrows towards the top helps retain the beer’s carbonation, preserving the head.