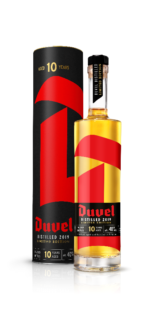 Duvel Distilled (40% abv) 10 years old, is now available as a limited edition from specialist spirits distributors in China, the Netherlands and the home Belgian market priced RRP 49,95€. The perfect serve for Duvel Distilled is in a tumbler over ice or simply neat in a small tulip glass.

Floral aromas with a touch of vanilla

Duvel Distilled is a pure, almost transparent spirit with straw yellow and golden hues with an aroma of vanilla, raisins and toffee. Allowing the spirit to mature in oak bourbon and sherry barrels has provided the liquor with a subtle vanilla touch. The finish is characterised by a warming mouthfeel.

Ten years of patience in a bottle

Since 2006, the Duvel Moortgat brewers have been working on a product that combines the best of the Belgian brewing and distillation worlds:  Duvel Distilled. Part of the basic brew for regular Duvel beer was set aside, distilled and then aged for ten years in oak bourbon and sherry barrels. The result is an exclusive Duvel based spirit that after two successful batches, is now ready for a third series.

“We are fascinated by different brewing techniques, but also by distillation and aging. We distilled the basic brew for Duvel into a strong alcoholic beverage. Then we filtered the distillate and let it mature for years in oak bourbon and sherry barrels. This autumn, we are launching Duvel Distilled, which has been aged in barrels for ten years. Some things are worth the wait!” says Hedwig Neven, brewmaster at Duvel Moortgat.

Duvel Distilled, 10 years old, is delicious with grilled fish and meat, seasonal vegetables such as artichokes and seasoned Brussels sprouts pan-fried with chestnuts, or fruit such as mangoes, peaches and bananas. Also, dark chocolate, crème brûlée, apple pie, or aged hard cheeses including Parmesan or mature Groendael are a great combination with Duvel Distilled.