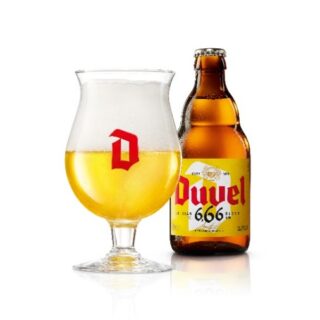 The Duvel Moortgat family brewery is celebrating its 150th anniversary with the launch of Duvel 6.66%, a new variant of Duvel (Dutch for ‘Devil’), the brewery’s iconic blond flagship beer.

London 2020: CEO Michel Moortgat comments: “To celebrate the 150th anniversary of our fourth generation family brewery, we were looking for a recipe that would be both accessible and full-bodied.  This is a 100% Duvel, brewed with the finest ingredients and with the characteristic refermentation in the bottle, as with Britain’s bottle-conditioned ales.  There are at least 666 good reasons to drink this beer; and helping to support the British hospitality industry with Duvel’s electricity is certainly one of them.”

Duvel 6.66% is that brand new brew. It is a 6.66% ABV sibling to the original Duvel 8.5% ABV, the iconic blond ale launched in 1970, and to the deliciously fragrant Duvel Tripel Hop Citra 9.5% ABV, which became a permanent feature in the Duvel Moortgat portfolio in 2017.

The warm yellow design of the Duvel 6.66% bottle sets the scene for a deliciously drinkable brew with a heavenly, mellow taste that is gently aromatic and refreshingly fruity, before ending with a typical Duvel punch.

Since its late January launch in Belgium, Duvel 6.66% has received an enthusiastic response – including from a younger audience, less accustomed to Duvel’s stronger beers.

All three Duvel beers use the same Scottish yeast strain as included in the family’s ales since the 1920’s, and all three are refermented in the bottle using the same malt varieties.

Duvel’s brewmaster Hedwig Neven, adds: “Our long brewing experience with aromatic hops and the highly successful collaboration with the Amsterdam city brewery ‘t IJ’ last year have formed the basis for this new Duvel.  With our own, unique Duvel yeast and a blend of three expressive malts, we created a beer that’s full-flavoured yet mild and accessible.  By leaving the beer partially unfiltered, we also obtain a light, natural cloudiness.  Duvel 6.66% will be available both on tap and bottled, a fantastic addition to the existing Duvel and Duvel Tripel Hop range that we have already brought to Duvel fans”.

Jan-Léonard Moortgat, himself a descendant of a family of brewers whose beer tradition dates back to the 17th century, founded together with his wife, Maria De Block, the Duvel Moortgat brewery 150 years ago.  Under the leadership of the fourth generation of Moortgats, the brewery has grown into an international household name, thanks to a focus on quality and a genuine passion for beer.  This approach has earned them recognition, including, one year ago, the “Family Business Award of Excellence”.

Duvel was given a new design a few months ago, with the bottle and packaging of original, classic Duvel blond receiving a fresh restyle, while other beers such as Duvel Tripel Hop Citra also acquired a new look.  Last year, the brewery was behind the launch of Moortgat’s HorecaComeback, set up to financially support companies in the hospitality sector in Belgium during the coronavirus crisis.

Style: Belgian Blond Ale, with refermentation in the bottle

Colour: A blond beer with an attractive, natural cloudiness

Aroma: Aromatic beer with a full-bodied, mild finish.  With lively and fruity aromas thanks to the use of orange zest and dry hopping.

Duvel 6.66% will start to be made available to the UK on- and off- trades in mid-February.  Also available in more than 20 countries, catering establishments, beverage centres and supermarkets in Europe and China, and during 2021 to countries such as Canada and South Africa – in supermarkets and beverage stores. Suggested on-trade price: £4.00 per 33cl.

Press release from R&R Teamwork on behalf of Duvel Moortgat