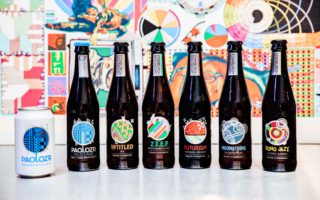 Their flagship beer, PAOLOZZI Helles Lager, is joined by new beer creations Z.E.E.P. Mediterranean Pale and UNTITLED IPA, while the former BUNK! experimental series has a new look as FUTURISM Modern Brown, MOONSTRIPS Smoky Wheat and SOHO JAZZ Cherry Saison. Each of the beers is named after – and features on its label and tap lens – artwork by Eduardo Paolozzi, and EBF will continue to make acharitable donation to the Paolozzi Foundation for every beer sold.

The brand new beers are UNTITLED IPA, a 5.5% blackcurrant- and mandarin-tinged brew featuring Old World, new-wave hops plus a traditional malt bill and historic Edinburgh ale yeast; and Z.E.E.P. Mediterranean Pale (3.5% abv), a high impact, relatively low alcohol pale ale brewed with lemon peel and rosemary. The launch coincides with EBF’s third birthday, which they recently celebrated with a party at the brewery.

“Each of the new beers is a works of art inside the bottle and out. They’ve come a long way in development, and now strike the right balance between distinctiveness and accessibility. We’re not interested in making flash-in-the-pan, gratuitously novel beers for short-term hype. These are well crafted, beautiful beers to appeal to beer novices and aficionados alike. Like Eduardo Paolozzi, they combine style with substance.” Martin Borland, Head Brewer

UNTITLED IPA is a brand new, 5.5% abv IPA. Surprisingly sessionable, it combines a traditional full malt bill and historic Edinburgh ale yeast with new hop strains from Germany and Slovenia, offering notes of mandarin, blackcurrant and grass. This juiciness is balanced by a savoury base and dry finish. The beer takes its name from an untitled proof by Eduardo Paolozzi, which features on its packaging.

FUTURISM Modern Brown (6% abv) is a very modern take on a good old-fashioned British beer style. It has been voted World’s Best American Brown Ale at the World Beer Awards 2017 and 2018. US hops Centennial and Chinook give a zesty kick to a roasted, sweet malt base, while Edinburgh ale yeast lends a silky texture. Its new look features elements from Eduardo Paolozzi’s ‘Futurism at Lenabo’ artwork.

MOONSTRIPS Smoky Wheat is a 5% Bavarian hefeweizen style beer with an addition of peat-smoked malt. Subtle smoke cuts the sweetness of the banana notes. It was voted World’s Best Smoke-Flavoured Beer at the World Beer Awards in 2018 – its first year since launch. Its new packaging features an excerpt from Eduardo Paolozzi’s ‘Moonstrips Empire News’ portfolio.

SOHO JAZZ Cherry Saison is a 6.5% abv saison jazzed up with juicy cherries. Whole dried Montmorency cherries are steeped in the traditional Belgian farmhouse style to add a touch of sweet and sour to the dry, warming base. It won Gold in this year’s Global Beer Competition. Its label and tap lens design feature elements from Eduardo Paolozzi’s 1992 poster design for Soho Jazz Festival.

All beers will be available in selected on- and off-trade, via Nectar Imports and direct from the brewery shop or online at edinburghbeerfactory.co.uk.

Eduardo Paolozzi (1924 – 2005) was an artist and sculptor born in Leith to Italian parents. He is credited as the ‘Father of Pop Art’. His ‘Manuscript of Monte Cassino’ sculpture (the ‘big foot’) is an Edinburgh landmark, and his ‘Vulcan’ sculpture and a recreation of his studio can be found in the Scottish National Gallery of Modern Art Two. His colourful Tottenham Court Road station mosaics are a much-loved part of everyday London. The Edinburgh Beer Factory pays a charitable donation to the Paolozzi Foundation for every bottle, pint and can of beer sold. (paolozzifoundation.org).