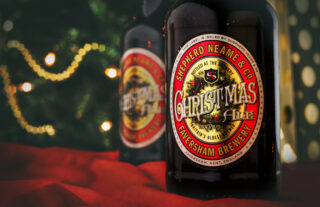 Shepherd Neame’s Christmas Ale has received a Gold Medal in the International Brewing and Cider Awards.

The seasonal ale won the accolade in the Strong Beer (ABV 7% – 9.9%) category of the world’s most historic beer and cider competition, known as the ‘Oscars of the brewing and cider world’, held at the National Brewery Centre in Burton-upon-Trent.  A stellar panel of expert industry judges blind tasted hundreds of beers and ciders submitted by brewers and cider-makers from around the world.

Christmas Ale is a full-bodied winter ale featuring a warming combination of fruits and spices. It combines pale and crystal malts with Target and Challenger hops for bitterness, and Goldings hops for aroma.

Mike Unsworth, Shepherd Neame Head Brewer, said: “Christmas Ale is one of our favourite traditions, a full-bodied, complex beer with hints of spice and mulled fruits. We are very proud of this glowing amber winter beer and it is wonderful that it has been recognised as world class.”

It is the latest in a series of accolades for Shepherd Neame’s beers, with other recent wins including 1698 being named the Best Pale Bitter over 5.5%ABV in the World Beer Awards, its Bear Island East Coast Pale Ale and Bear Island Triple Hopped Lager taking gold awards in the British Bottlers’ Institute Competition; and Strong Pale Ale receiving a Highly Commended honour in the Great British Food Awards.