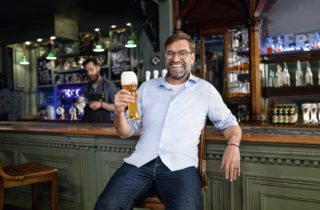 Bavarian brewery ERDINGER Weissbräu has announced a perfect sporting match, by teaming up with Jürgen Klopp, Manager of Liverpool FC.

Klopp, currently topping the English Premier League with his Liverpool side, has signed to be the new ambassador of ERDINGER Weissbräu, Germany’s largest privately owned wheat beer brewery.

The partnership was announced at the 80th birthday party of the brewery’s owner, Werner Brombach, with Klopp conveying birthday wishes via live video streaming from his Liverpool home.

The perfect match of football role model Jürgen Klopp and the ERDINGER Weissbräu private brewery teams up two strong and dependable partners. “Together, we plan to launch a number of ERDINGER campaigns in 2020 which will be fun for football fans and beer lovers as well as for those who don’t currently have a particular affiliation with either”, explained Werner Brombach.

With his easy going, approachable style and charisma, his demand for absolute quality and his enjoyment of life, Jürgen Klopp has established an identity that extends beyond football allegiances and even the game itself. He is therefore a perfect fit with the ERDINGER philosophy which is uncompromising on quality and enjoyment.

Whilst Jürgen Klopp is more used to talking about on-pitch tactics, he is happy to share the goals and ambitions for his new role as ERDINGER ambassador, commenting “When we first got to know each other, I quickly realised that ERDINGER’s owner Werner Brombach was an inspirational guy. We had an instant understanding and shared many of the same views on respecting and motivating those around us. We have a passion for quality and hard work, encouraging talent and single-mindedly pursuing our objectives whilst recognising the importance of a balanced lifestyle and enjoyment of our surroundings. Our mindset is positive and very similar, and I think we’re going to have a lot of fun working together here in the UK.”

Successful football sponsorships have long been a tradition at ERDINGER Weissbräu – from supporting individual testimonials to football clubs and grass roots sports associations. “ERDINGER has repeatedly proven its affinity with the world’s number one sport over the years” continued Werner Brombach, “and has partnered with Franz Beckenbauer, FC Bayern Munich and the Bavarian football associations amongst others in the past. Jürgen Klopp fits seamlessly into this long list of illustrious names in football and is an excellent ambassador to help bring the ERDINGER wheat beer brands to life through the sporting arena in which he is held in such high esteem.”

The plans for 2020 include an extensive campaign for the umbrella brand, ERDINGER Weissbier, with TV commercials, multimedia content hub, a high-reach out-of-home campaign and print advertising which will support on-trade stockists to maximise their sales potential.

ERDINGER Weissbräu is a private brewery, established in 1886 in the small town of Erding, Bavaria, on the outskirts of Munich.  For over 130 years, the outstanding quality of their wheat beers has been rooted in their passion for Bavarian brewing skills.  They have brewed exclusively in Erding and have never brewed anything other than the Bavarian speciality wheat beer.

Jürgen Klopp made over 300 appearances, starting and finishing his professional career as a player at FSV Mainz 05 in Germany’s second tier.  In 2001 the Stuttgart-born manager began coaching at the club where he’d spent 11 years as a player, achieving promotion in his third season in charge to record Mainz’s first season in the Bundesliga.

He was appointed manager of Borussia Dortmund in the summer of 2008, taking them from 13th place in the Bundesliga in 2007/08 to recording back to back Bundesliga titles, plus a German Cup win in 2011/12 and UEFA Champions League final appearance in 2013.

In October 2015, Klopp was appointed as Manager of Liverpool FC, his first role in the English Premier League, making an early impact as the team reached the UEFA Europa League final in 2015/16 and the UEFA Champions League final in 2017/18.  A Champions League title followed the following season, with only one Premier League match defeat in that same year.

Klopp’s Liverpool team currently top the English Premier League by 22 points and head their group in the UEFA Champions League.