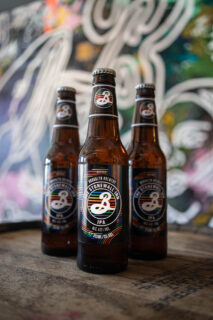 Speciality, craft and world beer importer Euroboozer has announced a special partnership with Brooklyn Brewery to bring in an eclectic selection of the brand’s most-wanted creations.

To get things started ahead of the festive season, Brooklyn’s unapologetically refreshing Stonewall Inn IPA has just arrived in bottle (330ml), can (440ml) and keg (30 litre) format.

The Stonewall Inn IPA is a citrus-forward session IPA with an abv of 4.5% and riotous notes of lemon peel and fresh grapefruit zest.

The easy drinking, beautifully balanced session IPA is the official beer of The Stonewall Inn over in New York City and its Stonewall Inn Gives Back Initiative.

“Brooklyn Brewery is one of the true pioneers of the craft beer movement with a host of iconic beers created by one of the world’s most talented brewers in Garrett Oliver. Backed by great people and beautiful values, it’s an absolute honour to be working with the innovative brewery in the coming years to bring some of their most exciting beers to the UK’s discerning craft beer lovers.”

Brooklyn Brewery and The Stonewall Inn

When the Stonewall Inn was raided in 1969, the LGBTQ+ community said enough was enough. They were sick of the violence, of living in fear and of the near constant police brutality. That first riot led to six nights of protest which became the catalyst for the modern day LGBTQ+ rights movement in the USA and beyond.

After being approached by The Stonewall Inn, Brooklyn created and launched the Stonewall Inn IPA in 2017, which is now proudly the brewery’s signature IPA.

Brooklyn also began its partnership with The Stonewall Inn Gives Back Initiative (SIGBI) in 2017 to help raise awareness, generate funds and make real change for the LGBTQ+ community.

Aside from an annual donation and direct support for SIGBI, Brooklyn Brewery is also working to create a more inclusive and welcoming environment for LGBTQ+ people in the craft beer industry.

Brooklyn Brewery stands with LGBTQ+ communities in fighting for equality 365 days a year and have just announced an exciting new CREATE SPACE initiative.

CREATE SPACE, which rolled out in September 2021, is a global initiative that uses Brooklyn’s platforms to amplify the voices of LGBTQ+ activists, who – like those before them at The Stonewall Inn – are continuing the fight for equality, acceptance and the space for everyone to be who they are.

Euroboozer will be working with Brooklyn to bring the partnership values to life in the UK but for more information or to get involved now, visit the CREATE SPACE Hub:

“We’ve always loved working with Euroboozer over the years due to their awesome people and passion for craft beer. So, we’re all really excited to be collaborating with them on our specialty beer portfolio and more importantly putting in the work to help support The Stonewall Inn Gives Back Initiative here in the UK.”

Brooklyn Brewery is a leading global independent craft brewer and a pioneer of the American craft beer revolution. From its home in Williamsburg, Brooklyn, the brewery draws inspiration from the diverse local community of innovators and makers to spread the culture and creativity of craft beer to over 30 states and more than 30 countries across 5 continents. Learn more at www.brooklynbrewery.com.

Started from the back of an old VW Vento in 2003, Euroboozer was set up by beer lover Martyn Railton, initially importing Austrian brands Stiegl, Schremser and Hirter. The company soon branched out across Europe and the Atlantic helping to drive the craft beer trend in the UK.

Eighteen years on the VW Vento has gone to be replaced with offices and a warehouse in Hertfordshire and Euroboozer now supplies some of the finest food and beverage establishments and retailers in the country.

In addition to the Austrian beers, the company exclusively distributes the Andechs, Blakstoc, , Harpoon and Other Half, as well as ten exciting Czech craft breweries and a host of leading UK brewers.