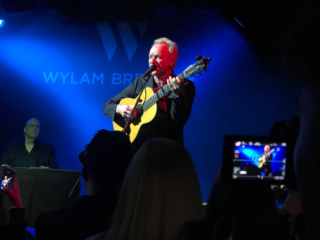 When a global superstar performs at your brewery and takes a liking to one of your beers, it must make you feel very proud indeed. Having said that, Dave Stone, director at Wylam Brewery in Newcastle, is rightly proud of everyone who comes to the brewery in Exhibition Park, Newcastle, to have a good time and enjoy great beer in great company.

But Sting is special to the North East and a performance by him in an intimate atmosphere is admittedly a very special occasion.

Dave Stone says: “We were asked to host the after-party following the premiere of The Last Ship musical at Northern Stage in Newcastle which raised money for the Nordoff Robbins Music Therapy Centre – a brilliant charity. The Graeme Wylie Foundation is currently building the first such centre outside of London which is dedicated to changing the lives of vulnerable and isolated people.

“It was a fantastic occasion and it was incredible even during the sound check when the hairs on the back of my neck stood up. We sometimes forget how iconic some of these songs are. He performed Englishman In New York, Fields Of Gold, Every Breath You Take… and was one hundred per cent up for it.

“He owns a vineyard now so he’s more of a wine man, but I told him beer had changed since he was a gadgie. He got right into our Macchiato Hazelnut Praline Coffee Porter.

“There were 400 in the audience which I suppose is an intimate gig for him – and such a small venue. He hung around for quite a while afterwards and was very easy to deal with.”

The Last Ship, directed by Lorne Campbell with music and lyrics by Sting celebrates the communities that lived – literally – in the shadows of the Tyne shipyards at Wallsend where he was brought up. It is showing at Northern Stage in Newcastle until April 7, then touring.

Sting first performed with The Police at The Mafcentrum in MaasBree, Holland, in 1977.

With thanks to Guild member Alastair Gilmour/Cheers magazine