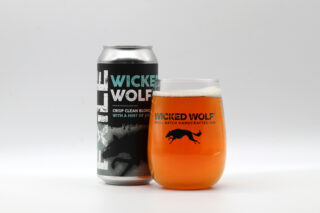 The latest release in Exmoor Ales’ Exile series is Wicked Wolf, a 6% pale ale that has been infused with juniper and is released in a 440ml can, which is a significant first for the 41-year-old Somerset-based brewery.

The Exile series originally began in 2018 with the brewery aiming to produce a modern hop forward style beers for a wider audience of beer-lovers, and also differentiating these newcomers from the well-loved and long established Exmoor beers such as Ale, Gold and Beast.

‘Up until now the Exile brands have just been available in cask to the on-trade,’ says Exmoor Ales’ Managing Director, Jonathan Price, ‘but the growth of our off-trade business over the last year has it more viable to expand the range and types of format. Unconstrained by the limitations of the cask format, our head brewer Tom Davis has been able to add a much greater expression of flavour and intensity to the packaged format.’

‘We didn’t want to make a beer that tasted like gin,’ says Davis, ‘however it was good fun to be influenced by some of the botanical characters you get in the gin-making process. The brewing process incorporates an infusion made with freshly crushed juniper berries, and we also add some wonderfully floral and herbal hops such as Bobek and Perle late in the boil.’

Exmoor Ales has been distributing Exmoor-based Wicked Wolf gin for several years now and Wicked Wolf, the beer, was the result of an idea between the master distiller and the head brewer to brew a beer with juniper. In reverse the distiller now makes Exmoor Gold gin, using a high distillate of Exmoor Gold as one of its botanical.

According to journalist Adrian Tierney-Jones, Wicked Wolf is ‘deep gold amber in colour, with hint of spicy botanicals on the nose, plus graininess and spice. There is a barley sweetness on the palate, alongside floral, herbaceous and piney characteristics; it is full-bodied in the mouth feel and the dry finish acts in league with a joyful bittersweetness’.

To celebrate the release of Wicked Wolf, throughout the whole of April there is an offer of a free sample can with every order over £20 made on Exmoor Ales’ online shop at www.exmoorales.co.uk/shop-2/