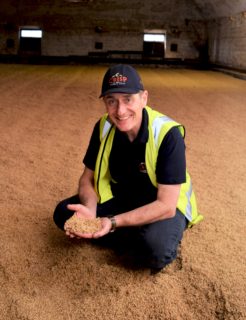 Importing and exporting has always come with its challenges. Never more so than now, with all the uncertainty surrounding the exact terms on which the country leaves the EU.

At the same time as exploring the new opportunities this might bring, British companies that operate internationally are looking to mitigate any potential negative impacts brought about by the changes. That means preparing for every eventuality and ensuring that export logistics operations and administration can continue as seamlessly as possible.

“AEO accreditation is recognised worldwide,” says Crisp’s craft brewing and logistics director Rob Moody.  “It shows that the Crisp’s role in the international supply chain is secure and efficient and provides valuable reassurance to customers and port authorities both at home and overseas.

“Having AEO status will help ‘fast-track’ our exports through customs. This will reduce bureaucracy and time in transit, allowing our malts to reach craft brewers and distillers faster and more efficiently.”

It may seem strange for countries that grow and malt barley to import it from Britain, but there are extremely good reasons for it. As Rob says,

“Some of the best barley in the world is grown in East Anglia and Scotland, where, conveniently, our maltings are located! This includes the revered variety Maris Otter and the 19th Century heritage variety Chevallier through to the innovative Clear Choice. They are expertly grown by specialist farmers in North Norfolk and brought to our maltings in Gt Ryburgh for processing into malt.

“The special flavours and characteristics of these malts are very different to those made in other countries. They allow craft brewers across the world to make authentic English-style ales as well as create new Craft beer styles. Our malts are in high demand and we are currently supplying brewers in 34 countries, the largest markets being the USA and Japan.

“Equally, we are able to supply craft distillers with malted barley grown and processed in Scotland, the universally recognised home of whisky distilling. This again provides them an integrity and quality that only the real McCoy, in terms of ingredients, can deliver.

“There is an opportunity to build the market for UK malt. Having AEO status contributes to the service levels we can provide to export customers, and will be helpful in the quest to gain new business among craft brewers and distillers across the world. A growing number of drinkers in countries near and wide will be savouring the tastes of East Anglia or Scotland as they sip their craft beers and whiskies.”