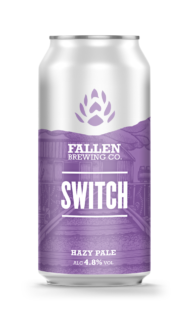 Just a few weeks after the launch of Fallen Brewing’s new-look range of beers, one of Scotland’s leading craft breweries is set to make headlines again by unveiling its latest beer: Switch a 4.8% ABV Hazy Pale.
“Switch is the first beer we’ve brewed which draws influence from the New England style” comments Paul Fallen, Founder of Fallen Brewing.  “We’d previously chosen to concentrate on west coast styles but New England pales and IPAs are such great, drinkable beers. It felt like the right time to make the switch and add a New England style to the range. Switch isn’t a full-on murk bomb but it certainly draws on the key characteristics of being soft, juicy, and full of ripe fruit flavours. We’re delighted with the outcome so expect others to follow.”
Head Brewer Angus Morison adds “The idea behind Switch was to produce a modern pale ale. This beer was designed to be bitter enough on the finish that it’s refreshing and session-able, while a well-rounded selection of classic and modern hops helps to create a fresh and fruit-forward hop character.
He continues “We opted to use a sweeter, softer malt-bill and water profile that’s favoured these days in hoppy beers. Keeping it under 5% ABV helps with drinkability, and overall, the intention has been to create an intriguing and balanced beer.”
Switch joins the line up with the other 440ml can releases which include Stirliner Weisse, Chew Chew, and Odyssey making up a great selection of eight beautifully branded beers.
Situated in the old Kippen Railway Station with views towards The Trossachs and The South West Highlands, Fallen Brewing takes inspiration from this railway heritage when it comes to naming its new beers. Switch is the latest to leave the station and joins the collection of other aptly named beers including Platform C, Sleeper Pils, and Local Motive.
Fallen Brewing’s range is vegan unless stated otherwise, sustainable, and environmentally robust. And with the brewery’s ongoing commitment to only using the highest quality ingredients, these credentials make them the ideal beer brand to stock for those looking for craft beers with a difference.
The brand, which recently withdrew listings of its range from all supermarkets and severed ties with Molson Coors, announced a dedicated commitment to independent beer wholesalers and shops, restaurants, and bars across the UK at the end of July 2020 followed by an exciting brand refresh in August 2020.
Available now in selected independent stores, wholesalers with an RSP of £3.30 for a 440ml can. Visit www.fallenbrewing.co.uk for a list of stockists.
~ Ends ~
Notes to Editors
Fallen is pronounced “Pha-Lin”
Other Fallen Beers include;