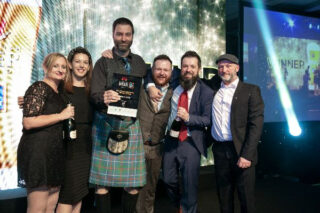 On Friday 8th October Fierce Beer was awarded the prestigious title of ‘Scottish Brewery of the Year’ at the 6th annual Scottish Beer Awards, sponsored by Aldi.

Along with winning the top prize at the ceremony held at DoubleTree by Hilton in Glasgow, Fierce Beer also collected 10 medals which included a record-breaking 6 golds.

The team also collected the prize for ‘Product Development Team of the Year’ thanks to the focus and introduction of a core range of beers and sales strategies during the Covid-19 pandemic to allow phenomenal growth and quality of their beer range.

Dave Grant, MD Of Fierce Beer said ‘It is outstanding to be recognised for our efforts, especially after such a tough year for all – and amongst such prestigious company.  Our dedication to innovation and quality drives us forward each day, and we are so lucky to have such an amazing team here at Fierce Beer.  Huge thanks to the organisers, sponsors and judges for pulling everything together.’
Earlier this year the 34 expert judges participated in a blind tasting and all entries were marked on quality, appearance, and flavour without prior knowledge or any information to identify the beers or brands that they were sampling.

This years medal haul has cemented Fierce Beer into the history books as being the most awarded Scottish brewery since the ‘Scottish Beer Awards’ began – with a current total of 42 medals!


About Fierce Beer
Fierce Beer mashed in their first-ever commercial brew back in May 2016 at the brewery’s home in Dyce, Aberdeen. With a strong focus on producing great, flavour-packed beers ranging from traditional pilsners, juicy hop bombs and fruity sensations right through to luscious barrel-aged stouts and tart sours, Fierce Beer went on to win ‘Breakthrough Brewery’ at their first awards in 2017 and as of 2021 are the most awarded Scottish brewery for the last 3 years. The brewery also operates three bars, located in Aberdeen, Edinburgh, and Manchester.

About the Scottish Beer Awards
The Scottish Beer Awards is an independent awards programme that recognises achievements in the brewing industry across Scotland. The 6th annual awards, sponsored by Aldi, was judged by 34 expert tasters who participated in a wide-ranging blind tasting competition. The competition judges various according to their beer style with marks awarded for quality, appearance, and flavour without judges having any information on brewers, branding or labels. For further information, visit www.scottishbeerawards.co.uk.