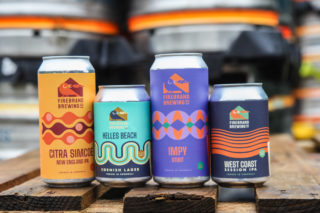 After a huge amount of success at the recent SIBA Beer X in Liverpool, Firebrand Brewing Co are launching their online shop, making it easier for customers to buy their award-winning beer directly from the brewery. Winning six regional and national awards, Firebrand took home the Regional Gold in Keg for Citra Simcoe NEIPA, Regional Silver in Keg for both Helles Beach Cornish Lager and Impy Stout, National Silver awards for Citra Simcoe NEIPA in Keg and West Coast IPA in Can, along with a National Bronze award for Impy Stout in Can.

Firebrand have recently rebranded with a new visual identity but are sticking to what they do best: brewing excellent Cornish craft beer from humble roots. The rebrand incorporates the mythical Cornish chuff into the Firebrand logo, keeping Cornish identity at the brand’s core.

Firebrand are ready to compete with the best breweries in the country and are growing their online presence to bring their unique range of award-winning beers to a wide audience. The brewery will be selling the full range of their canned beers as well as their rebranded merchandise on their new site: www.firebrandbrewing.co.uk

To help support customers in self-isolation, Firebrand are offering FREE shipping on orders of £20 or more. The Launceston-based brewers are looking to raise the nation’s spirits by delivering their award-winning beers directly to doors across the UK.