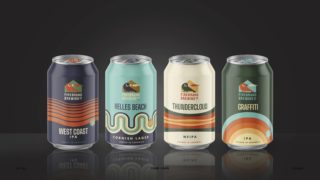 Firebrand looks to become the next Cornish powerhouse brewery with their new look rebrand.

Launceston, 12 February 2020 – Firebrand Brewery have recently undergone an entire rebrand that is set to officially launch on the 27th of February. Looking to grow the business, Firebrand enlisted the help of award-winning design agency, Kingdom and Sparrow, to overhaul the look and feel of the old design. When asked about the reasons for the update, owner Joe Thomson said, “I started the brewery in 2013 and we have grown a lot since then. As we look to continue to build our business and take it to the next level, I felt it was time to update the branding to reflect not just who we are, but who we want to be.”

To celebrate the new branding, Firebrand have organised a tap takeover style event at pubs and bars across the South West. “We thought it would fantastic to celebrate with a few of our best customers and provide them with the first batch of beer. They have been with us since the beginning and launching with them is only right” said Thomson. Firebrand are also attending London craft beer festival, Brew LDN, which takes place at the end of February in The Old Truman Brewery to officially launch the updated branding.

Taking on a new logo and website, the brewery will also be changing the look of their packaging on cans and bottles. With the investment in the business, Firebrand have purchased top of the line new equipment, including a canning line and fermentation tanks. Thomson said, “We’ve had an investment in the business, so the rebrand is just the beginning. We are looking to really step up our beers which are already multi award winning, but we’ll be able to take them to the next level with all of the incredible new kit.” Firebrand hope to grow exponentially over the next year, which means new job opportunities available in a community affected by recent business closures. “We are hoping this investment doesn’t only help us, but help the area we’ve been brought up in.”

Looking to embrace the history of the farm-based brewery and their strong Cornish identity, Firebrand’s new logo includes a fire breathing Cornish Chough and the milking parlour where the brewery was founded. “I am excited that we are able to build upon the last 10 years of work and I believe that the re-brand can help us build Firebrand Brewing Company into a Cornish powerhouse.”

Firebrand enters 2020 leaping with enthusiasm and looks to build upon its existing business by taking its fantastic beer to a broader audience across the UK and the rest of the world. As part of its growth plans, Firebrand will be relocating from its home in the converted milking parlour, to a modern unit which hopefully will enable a wider audience to share and experience the award-winning brewery and its beer.