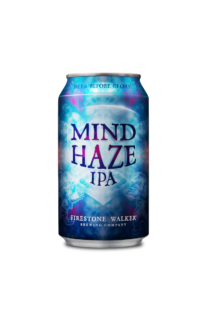 After nearly a year of experimentation, Firestone Walker Brewing Company is set to unveil Mind Haze—a hazy IPA that sets the pace with a luscious texture, explosive tropical hoppiness and an unsurpassed shelf freshness for the style.

Indeed, as the hazy movement caught fire, Brynildson and his team remained patient. They tinkered with the style, retooling and refining their beer with several R&D batches until they nailed what they were after.

The result is Mind Haze, Firestone Walker’s first-ever hazy IPA, and a fitting complement to the brewery’s robust IPA portfolio. Mind Haze launches officially at The White Horse, Parson’s Green, on Thursday 18th April from 6pm at an event open to all. Firestone Walker will be pouring a range of their beers alongside Mind Haze, with cans to take away.

For Brynildson, the hazy IPA style doesn’t just hearken back to the East Coast, but all the way back to southeastern Germany and the Bavarian Hefeweizens of lore.

“I recently spent some time at Gutmann brewery in Titting, and they have this amazing beer called Weizenbock,” Brynildson said. “It’s this beautiful 7.2 percent ABV hazy beer with a creamy mouthfeel and a tropical-banana aroma that fits right in with the hazy IPAs of today—and yet they’ve been making it for more than 50 years.”

With that historical context in mind, Brynildson and his team embarked on the goal of creating a beer that would ring all of the bells of a new age hazy IPA while putting their own stamp on the style. Along the way, they wanted to create a beer that would stand shoulder to shoulder with Firestone Walker’s other IPAs in terms of quality and shelf stability.

“We’re not relying on residual yeasts or starches for turbidity,” Brynildson said. “The haziness and mouthfeel of Mind Haze are cultivated by more stable means, namely using 40 percent wheat and oats in the grain bill while nailing the timing and interplay of our hop additions.”

He added, “We are drawing from our past experience in making Hefeweizens, and then aiming to amplify the esters gained from a specially chosen yeast and an array of really fruity hops.”

All in The Mind

The name and imagery of Mind Haze are a nod to the marine mists that routinely envelop California’s Central Coast—and to the idea of a beer that messes with perceptions of what a hazy IPA can be.

Said Brynildson, “We are not claiming to reinvent the style—we want Mind Haze to offer the best of what people expect from a hazy IPA. That said, we’re going about it in a little different way, and I think that’s what gives Mind Haze its own unique signature.”