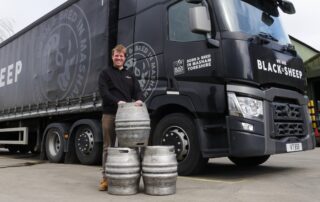 Black Sheep Brewery has started its first deliveries of cask beer since December ahead of the planned reopening of pubs next month.

To ensure the beer is in optimum condition ready for publicans to serve from April 12th, Black Sheep restarted brewing two weeks ago and has been taking orders from its pub and wholesale customers in anticipation of reopening.

Ahead of April 12th, the Masham-based brewery has introduced a re-opening range, which includes Black Sheep Best Bitter and Black Sheep Pale Ale, both available in cask for the first time in 2021.

Black Sheep Best Bitter is also available to pubs in keg format, along with Black Sheep IPA and its Yorkshire-inspired, 54 Lager.

Black Sheep’s distribution team, which have been providing local home deliveries during the lockdowns, are now reloading its fleet of vans with casks and kegs for delivery to pubs in its Yorkshire heartland and across the UK in the next two weeks.

Charlene Lyons, chief executive of Black Sheep Brewery, said: “We have been planning our return to cask brewing from the moment Boris Johnson announced the plan for pubs to reopen and we’re really excited to start deliveries again.

“This is massive for us and signifies, hopefully, the start of a new chapter for Black Sheep and also our pub customers, who are at the heart of our business and we’re doing everything we can to support them.

“We have been brewing for the past couple of weeks and will continue to do so in an effort to support pubs that can open their outside spaces in April and then welcome customers back inside in May.

“Around a third of our pub customers will reopen on 12th April and hopefully another third from May 17th, followed by the remainder, which is very exciting and will help them again take their place in the centre of their communities.

“Cask beer is the core of Black Sheep, so in terms of morale within the business from seeing our brewing team at work, through to the beer being racked in cask and then delivered to pubs, this is a thrilling moment.”