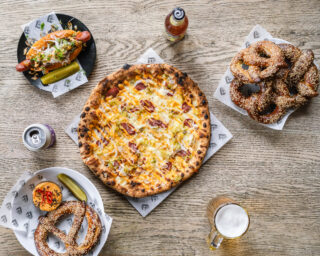 With the real Oktoberfest unable to take place this year, the team at The Five Points Brewing Company have decided to throw their very own socially-distanced celebration in its honour. Taking place at the company’s Mare Street Taproom on what would have been the famous Munich festival’s opening weekend (18th – 19th September), Five Points Does Oktoberfest will feature lagers from some of the UK’s best craft breweries, including Donzoko, Lost & Grounded, Braybrooke, North Brewing Co, The Kernel, Unity Brewing Co, Burning Sky, Anspach & Hobday and – of course – Five Points! The event will also feature DJs and the delicious ACE PIZZA, who’ll be on-site serving up Bavarian-inspired pizza specials (think sausage, Swiss cheese and sauerkraut!) plus hot dogs and pretzels from their wood-fired oven. Veggie-friendly seitan alternatives available too. For more information, visit Fivepointsbrewing.co.uk

Offering the perfect space for socially-distanced get togethers, The Mare Street Taproom launched back in July in the yard and arches of Five Points’ Hackney warehouse. Designed to follow the best current safety measures, the venue has room for 154 guests to drink safely, promising an atmosphere worthy of the real Oktoberfest.

Commenting on the event, Five Points Events Manager, Tom Powell said: “Oktoberfest is one of the highlights of the beer calendar, and we always love trying the one-off specials brewed by our friends across the UK beer scene at this time of the year. We’re really excited to be able to pour some of the UK’s finest lagers in a safe environment. It’ll be a fitting tribute to the festival in Munich, and a celebration of great independent beer too.”

Guests at Five Points Does Oktoberfest are encouraged to book tables in advance via Design My Night here.

Five Points have worked hard to adjust to the challenges of the Coronavirus epidemic – their online business has exploded, they’ve launched new mobile app Five Points On Tap, and are now offering a home delivery service from their pub The Pembury Tavern.

Five Points are offering all NHS staff 20% off its web store as well as pledging £1 for every web store purchase to a community charity. July’s donations are going to Black Minds Matter, a new fund that helps provide Black individuals and families with free, professional, culturally competent mental health resources and services.

Charities will change monthly to help those in need.
Five Points also own Hackney pub The Pembury Tavern, which is now back open for beer and ACE PIZZA for both takeaway and home delivery!
www.fivepointsbrewing.co.uk
@fivepointsbrew