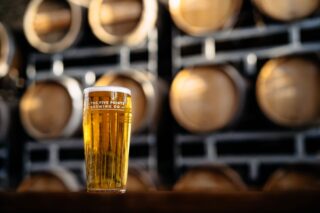 Hackney’s largest independent brewer, Five Points, is gearing up to launch a giant new brewery and taproom in the heart of Hackney. Based at Five Points’ flagship HQ in London Fields, the new venue will be a welcoming space for customers to drink tank-fresh pints, right where the beer is brewed, for the very first time.

Alongside the full range of Five Points beers on tap – including favourites such as the iconic Five Points Pale – visitors can expect special and limited edition brews, seasonal beers, and excellently conditioned cask ales. There will also be mouth-watering NY-Neapolitan pizzas on offer from resident dough-slingers ACE Pizza, who launched ACE Under The Arches on the site earlier this year.

Five Points’ new venue opens to the public on 20th November. To celebrate the launch, all registered visitors on this day will receive a complimentary pint of the freshest Five Points beer. For more info & bookings, see fivepointsbrewing.co.uk/pubs/mare-street-taproom/

Five Points has been brewing its award-winning beers in Hackney since 2013, and earlier this year it opened its new HQ in the area. Throughout spring and summer, the HQ was home to a giant pop-up outdoor taproom, and now customers will be able to flock to the space once more, as Five Points launches Hackney’s largest taproom and working brewery on the site.

Located just a stone’s throw from Broadway Market, the venue will have space for over 130 people indoors, across the ground floor and an impressive mezzanine viewing gallery, nestled amongst the brewing tanks.

Tank-fresh beer will be celebrated every Thursday and Friday between 5 – 7pm, where the most recently filled tank will be available for just £3.50 a pint. What more, attendees who register for the opening on Saturday 20th November will receive a complimentary pint of the freshest beer on site, to celebrate the venue’s launch.

From Saturday 4th December, the site will also offer weekly brewery tours and guided tastings for visitors, allowing people to immerse themselves and experience first-hand how Five Points brew their award-winning beers. With three 90-minute tours taking place each Saturday afternoon (12pm, 2pm, 4pm), with space for up to 20 people on each one, these will be the biggest and most frequent brewery tours of their kind in central London.

Food at the taproom will come courtesy of ACE Pizza, who will be cooking up their famous, slow-proofed, light and crispy NY-Neapolitan pizzas from the ACE Arch, with table service available. As well as the usual favourites, ACE’s menu will feature some exciting new specials, as well as an extensive vegan range. ACE Pizza will also be teaming up with local foodie brands for special collaborations each month.

With a growing team of over 40 employees now working in Hackney, Five Points is proud to call the borough its home, and is committed to working with other members of the community for its new venue. Every Friday and Saturday, the taproom will host DJs from neighbourhood bar MOTH Club.

Commenting on the launch, Five Points Co-Founder and Managing Director, Ed Mason said: “We are very excited to be welcoming our local community into our brewery to drink the freshest Five Points beers in London. And to be able to keep our new brewery and Taproom right in the heart of central Hackney, where it all began eight years ago, makes us really happy.”

Five Points is an accredited London Living Wage Employer, which has also helped to establish an apprenticeship scheme for training brewers. In 2018, the brewery launched a charity partnership scheme, in order to support local charitable, arts and community projects.

The Five Points Charity Partnership Scheme, founded in 2018, supports local charities and organisations through fundraising and donations. Since the first Lockdown began, Five Points have donated £1 to charity for every order placed on their webshop. This year’s charity partners are mental health charity Mind in the City, Hackney & Waltham Forest, and the Hackney Food Bank.