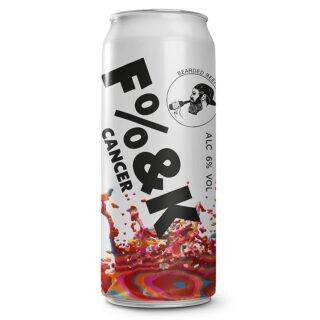 F&%k Cancer was created to raise awareness of the 400k people impacted by cancer annually in the UK.

Edinburgh, Scotland – Some of the biggest craft beer brands in the UK are uniting to raise money for Teenage Cancer Trust in the hope of raising awareness of the impact of cancer. Brewed at Ride Brewing Co in Glasgow, F&% Cancer craft beer projects first brew is a DDH Oaty NEIPA 6%, created with generous donations from throughout the industry.

Cancer affects 400,000 people directly in the UK every year and impacts even more people indirectly, including families and friends. David Laird – the mind behind the F&%k Cancer craft beer project – was one of those affected after his Granddad, John Laird, was unfortunately affected by a short, surprise battle with cancer. Inspired to raise awareness for the cause and seeking a distraction, David came up with the idea of brewing a craft beer, and sold to raise awareness of the devastating impact of cancer in the UK.

Laird has had support from some of the biggest and best names in craft beer throughout the UK to ensure the F&%k Cancer craft beer projects beers are expertly crafted with the finest ingredients. This includes working with Yakima Chief Hops, Simpsons Malts and Murphy and Sons.

Now, the F&%k Cancer craft beer project is selling out on announcement. As part of their plans, there is an upcoming series of F&%k Cancer beers being made in collaboration with some of the most exciting craft breweries. Next up is an Imperial Stout, created in conjunction with the “world’s best stout brewer” Emperors Brewing being brewed at Loch Lomond brewery in Scotland.

Despite the hardship that F&%k Cancer has been born out of, the charitable craft beer has created something positive. For more information and to keep an eye on their stock, visit https://www.cohop.co.uk/fcancer.

David Laird has worked withing the craft beer industry now for 5 years after his Granddad, John Laird, unfortunately suffered through a short and surprise battle with cancer. Seeking a distraction, David decided to channel his energy into a craft beer project. David has worked for some of the biggest names in craft beer brewing and utilised his contacts to develop his F&%k Cancer craft beer. F&%k Cancer is a charitable project born out of a desire to make a positive difference and raise awareness. For more information and to keep up with the F&%k Cancer journey, visit https://m.facebook.com/pg/FKCancerbeerproject/about/.