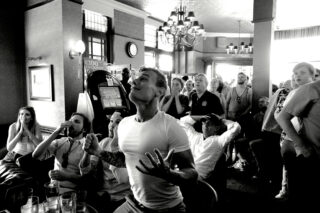 Pubs showing the World Cup qualifiers are being asked to put their customers in the picture when England play Hungary on Tuesday 12 October. London photographer Mike Taylor is offering one pub a free photoshoot as part of his “Watching People Watching Football In Pubs” project.

Taylor will give the selected pub a portfolio of his atmospheric black and white images for use on the pub’s website and social media, as well as two framed prints of their choice to display in the bar.

He said: “The faces of people watching football in pubs are fascinating. Their expressions can go from exhilaration to despair in seconds, and black and white photography captures that wonderfully.

“I’ve been taking these photographs for a couple of years, with the aim of hopefully mounting an exhibition, but there are so many different pubs out there, and I wanted to spread the net as widely as possible. Asking pubs interested to enter a draw seems the fairest way.”

Any pub showing the Group I England v Hungary game, being played at Wembley on Tuesday 12 October, can enter the draw by emailing oneofonlyten@gmail.com. Entries should be received by noon on Friday, 24 September.  One pub will be selected for a customer photoshoot during the match.

A selection of Mike Taylor’s “Watching People Watching Football In Pubs” photographs can be seen at  https://oneofonlyten.com/pages/people-watching-football-in-pubs