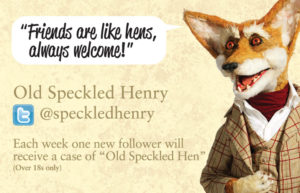 I feel compelled to tell you about my latest adventure – this time on the world wide web-thingy.  I’m helping spread the word about that most sublime of ales, “Old Speckled Hen”, on something called Twitter.  Daft name if you ask me but apparently it’s all the rage and a bit of a hoot.

As you know, I am something of a television celebrity and my many fans tell me that my hilarious anecdotes and tales of quests to seek out something different are so entertaining that they are like a few pints of “Hen” – best when shared!

So, I feel obliged to bestow my pearls of wisdom and mirth with as many people as possible @speckledhenry.

For instance, did you know that this year is the 50th anniversary of my favourite little run-around the classic MGB?  Something to celebrate I’d say as my favourite beer, “Old Speckled Hen”, was actually named after an old MG car used at the MG Car Factory.

Here are a few words from my old mucker, Dom South.  He’s Greene King’s marketing guru.  A curious ol’ chap but a big fan of my televised work, I’ve been told.

“”Old Speckled Hen” is an iconic brand with a distinctive, quirky English personality – just like the MGB and our very own Old Speckled Henry.  That’s why we’ve chosen him to front our summer activity to celebrate our heritage.

“The Fox’s Twitter posts will reflect his eccentricity and humour and we’ve no doubt will appeal to the many fans of “Old Speckled Hen”.”

Anyway, enough of him.  Back to me.

You’ll recall, because I know you’re paying attention, I mentioned the lovely link between the iconic MGB and the equally iconic “Old Speckled Hen”.

Well, many years ago, the smooth, full-bodied brew, started life as a commemorative beer to mark the golden year of the MG factory in Abingdon down in dear old Oxfordshire taking its name from an old canvas-covered MG used by employees.

Anyway, this little motor would park outside the factory paint shop and get splattered with flecks of colour, thus becoming affectionately dubbed by locals as the ‘Owld Speckled Un’.

‘Owld Speckled Un’.  “Old Speckled Hen”.  Do you see what they’ve done there?

Absolutely fascinating stuff. And now my close personal friend Dom (you’ll remember him?) wants to say something else.

“Recent research shows that “Old Speckled Hen” continues to be the ale pub goers most want to see on the shelf in supermarkets or on the bar when they head into their local[1].”

Quite rightly so if you ask me.  There is nothing quite like “Old Speckled Hen’s” rich amber colour. The superb fruity aromas are complemented by a delicious blend of malty tastes that give a balanced sweetness, followed by a refreshingly dry finish.

Must dash, perhaps we can catch up again on this Twitter thing @speckledhenry. After all, friend’s are like Hens, always welcome!

Having starred in numerous television ads on his quest to seek out something different, Old Speckled Henry is using Twitter to share his pearls of wisdom and wit on the world.

The curious fox’s foray into social networking comes at the start of a summer of celebration for “Old Speckled Hen”.  The full bodied beer was originally brewed to commemorate the 50th Year of the MG Factory in Abingdon, Oxfordshire and took its name from the factory run-around which, being splattered in paint, was affectionately known as the ‘Owld Speckled ‘Un’.

As the MGB brand celebrates its 50th anniversary this year, Dom South, marketing director at Greene King, explains that it is fitting for “Old Speckled” Hen to be part of the commemorations.

“”Old Speckled Hen” is an iconic brand with a distinctive, quirky British personality – just like the MGB and our very own Fox.  That’s why we’ve chosen him to front our summer activity to celebrate our heritage in the year of the 50th anniversary of the MGB.

“The Fox’s Twitter posts reflect his eccentricity and humour and we’ve no doubt will appeal to the many fans of “Old Speckled Hen”.

Old Speckled Henry, who can be followed on Twitter @speckledhenry, said that he will be tweeting regularly about life, the arts, links to odd stories and competitions.

Or Jo Kreckler, PR manager, Greene King Brewing and Brands on 07974 132635 or joannakreckler@greeneking.co.uk