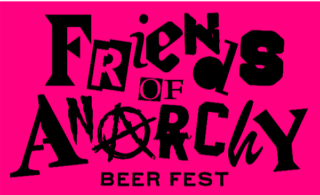 The 2nd edition of the craft beer festival heads to Anarchy Brew Co. this January

The Tryanuary edition of Friends of Anarchy Beer Fest is heading to the taproom at Anarchy Brew Co. in Walkergate, Newcastle upon Tyne, and will feature a host of craft breweries from across the UK and beyond. Brewers and their teams including Weird Beard (London), Brass Castle (North Yorkshire), and Wild Weather (Reading) will be coming together alongside North East breweries such as Wylam, Donzoko, and Alpha Delta, to pour their beers and chat to visitors.

Festival organiser Daisy Turnell, Marketing Manager at Anarchy Brew Co. said ‘We hosted our first Friends of Anarchy beer fest in August last year, and it was really well received by customers and brewers, so we decided to do it all again to support Tryanuary. As a member of the Guild, it’s important to me to try to entice more like-minded people to our region, as the Newcastle beer scene is flourishing’.

This second edition of the festival sees a completely new line-up of breweries, plus local spirits from Hepple Gin and Durham Distillery, and Marlish soft drinks available at the main bar. Food stalls for the festival come from local traders Domestique, The Feed Zone, and Meat Salt Smoke, plus resident burger vendor Rib & Rub. There’s also a chance to buy jewellery made from recycled beer can artwork, courtesy of Brewery Jewellery.

Dawn Miles, co-owner of Anarchy Brew Co. said ‘It’s fantastic to be part of the local community since we’ve moved the brewery to Newcastle from Morpeth, and to be able to bring beer fans together for these events makes us proud to give more people the chance to meet many of the amazing brewers we know and love.’

The Friends of Anarchy Beer Fest takes place at Anarchy Brew Co.’s taproom on Saturday 25th January (tickets for the public are available via TicketWeb, priced at £5 per session). The daytime session is family-friendly (12pm – 4.30pm), whilst the evening session is over 18s only (5.30pm – 10pm). For any trade ticket holders coming to the evening session, there’s an after-hours session with Brewers Karaoke from 10pm – midnight (…apologies in advance to any music fans out there).

Follow Anarchy Brew Co. on social media for updates on the event, and to see more breweries announced in upcoming days: