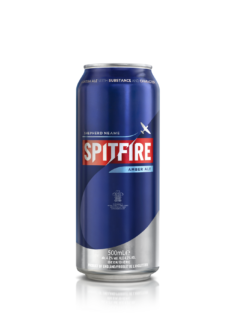 The Faversham-based brewery has just unveiled bold new designs for both 500ml cans. It follows the relaunch of both brands at the start of the summer.

The Spitfire Amber Ale cans (4.2% ABV) boast a matt finish and a premium navy, red and silver design, depicting the new logo showing the iconic Spitfire aircraft soaring through the heart of the logo, its upward trajectory mirrored in the curve of the can.

The new Whitstable Bay Pale Ale cans (4.0% ABV) also offer brilliant stand-out on shelf, with their bold blue colour. Again boasting a matt finish, the can features the collection’s new logo, inspired by the creative spirit of its coastal home. It retains the classic oyster yawl synonymous with Whitstable and anchors it alongside the town’s iconic pub the Old Neptune.

Shepherd Neame’s Head of Marketing, Brands and Communication Joanna Richardson said: “We are delighted that the new Spitfire and Whitstable Bay designs are now being used across all the product packaging. We are delighted with the new look cans, which are instantly recognisable with great stand-out on shelf. We feel confident that they will help raise brand awareness and encourage more consumers to try our fantastic beers.”

Spitfire Premium Kentish Ale (cask: 4.2% ABV, bottle 4.5% ABV) was first brewed in 1990 to celebrate the Battle of Britain, fought in the skies above Kent 50 years earlier, and is named after the legendary Spitfire aeroplane. A truly British beer, it is also an international success, sold in more than 40 countries, carrying a Royal Warrant and the same protected status afforded to Champagne.

Whitstable Bay Pale Ale was launched in 2013 and perfectly balances sweet maltiness with the pine aroma of hops added late in the brew to produce a light-coloured, thirst-quenching ale. The collection has now grown to incorporate Organic Ale, Blonde Lager, Ruby Ale and Black Stout.  In addition to the refreshed look, Red IPA has been renamed Ruby Ale to better represent the character of the beer to consumers.