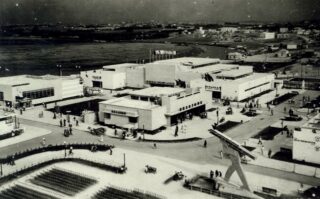 An aerial view of the Levant Fair.

In August I completed a 13-part blog series on beers and breweries during the British Mandate of Palestine (1923-1948). Each part is listed and briefly described in this post: http://www.beeretseq.com/beer-in-mandate-palestine-series-summary-index/

The series examines the beers imported to Palestine during that period as well as breweries established in the territory. It also looks at advertising and promotional techniques of exporters, e.g. by Whitbread, George Younger, Barclay Perkins, Heineken, and describes the Heineken stand at the mid-1930s Levant Fair. The series breaks new ground in beer historical studies.