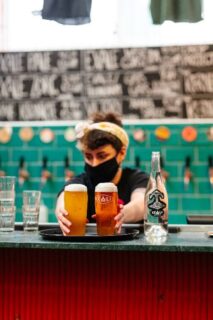 Paul Davies’ AleHunters launched their new North London Brewery Tour in September bringing their family of London tours to 3, with regular trips to Bermondsey and Bethnal Green. This walking tour takes in the delights of the ‘Blackhorse Lane Beer Mile’ which features 5 breweries and the tap at Truman’s Social Club. Paul says ‘this new tour is very different from our others. Apart from being based in North London, the vibe there is much more serene than Bermondsey and not quite as trendy as the East End. The Social Club is a good place to stop for a bite after some beers and for the more thirsty there is the option of popping on the tube to Walthamstow to take in the delights of Pillars and Wildcard’s Barrel Store.

AleHunters were also delighted to be awarded the Traveller’s Choice Award by Trip Advisor in September. Paul says ‘this is such an honour as it is awarded following positive reviews by our customers. To achieve this during a year when the majority of our events have been online is truly special and humbling’.