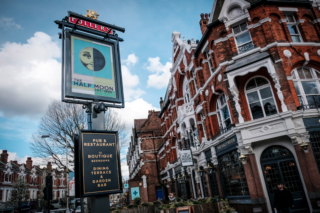 The Half Moon in Herne Hill [10 Half Moon Lane, London SE24 9HU] is this year’s winner of The Griffin Trophy – the annual Pub of the Year competition from Fuller, Smith and Turner. The pub, run by Matthew Dutson, won the top prize ahead of nearly 400 other Fuller’s pubs. The Half Moon epitomises what makes Fuller’s pubs stand out from the rest – fresh food, quality drinks, an amazing and outstanding customer service.

Fuller’s Chairman Michael Turner said: “This is a well-earned award for Matt and I’m delighted to be presenting it to him. The Half Moon is a stunning pub steeped in cultural history and at the heart of its local community. Fuller’s acquired the site in 2016 after it was damaged by flooding. With some local opposition to Fuller’s plans for the pub, we faced some challenges when refurbishing The Half Moon, but Matt and his team worked hard to be a part of the local community. Meetings were held with neighbours before the pub opened to ensure local residents were included in the plans.

“The pub was beautifully restored and is even more impressive than before – with some of its original features still in place. The pub boasts 12 beautiful bedrooms, named after the 12 men who have walked on the moon, including Armstrong – the largest bedroom in the Fuller’s estate. The Half Moon is now not only loved by locals – including those who were sceptical – but by visitors from far and wide. Frequent events at near-by Brockwell Park means the pub is now on the radar of those not so familiar with South London too.”

The Half Moon has three bar areas, a dining area, a large garden – with its own bar – and a separate function room that can be hired out for private events. As well as serving a great selection of cask ales, craft beers and premium wines and spirits, The Half Moon offers a delicious selection of dishes on its menu – and is open for breakfast, lunch and dinner.

Matt Dutson, Manager of The Half Moon, said: “I am really chuffed with winning this award – it’s a fantastic surprise. My team and I have been on quite a journey with The Half Moon – so I’d like to thank them, and our customers, for making my pub a truly special place.”

The prize for the winning pub comprises a £5,000 holiday, a staff party, an engraved plaque and the coveted Griffin Trophy itself.

A selection of photographs can be downloaded here – https://we.tl/t-swMiFNDVLP

Fuller, Smith and Turner P.L.C. is a premium pubs and hotels business. The Company runs 179 Tenanted pubs and 215 Managed Pubs and Hotels, with a focus on delicious fresh, home-cooked food, outstanding cask and craft ale, great wine and exceptional service. The Company also has 1028 boutique bedrooms in its Managed estate. The Fuller’s pub estate stretches from Brighton to Birmingham and from Bristol to the Greenwich Peninsula, including 174 locations within the M25. In June 2018 Fuller’s acquired Bel & The Dragon, comprising six stunning country inns (included in the pub numbers above), and the Company also owns The Stable, a craft cider and gourmet pizza restaurant business, which has 16 sites in England and Wales. In April 2019, Fuller’s sold its brewing division to Asahi Europe Ltd and in October 2019, the Company acquired Cotswold Inns and Hotels, comprising seven high quality, freehold country inns and hotels in the Cotswolds, together with two vibrant leasehold bars in Birmingham’s city centre (included in the numbers above).