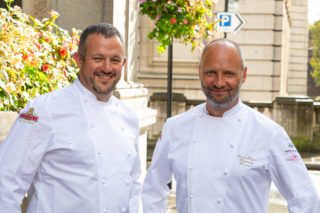 Fuller’s has already carved out a reputation for real food cooked by real chefs across its network under the Fuller’s Kitchen brand while the Fuller’s Chefs’ Guild, formed in 2015, provides for the ongoing development of Fuller’s chefs, defining the brigade structure and the technical, management and leadership standards expected of each member of the food team.  By partnering with the UK Academy, Fuller’s Chefs’ Guild gains access to a unique body of the country’s leading chefs. Fuller’s expect this partnership to further inspire and train staff across the Fuller’s network and so continue to differentiate the customer offering delivered by Fuller’s Kitchen.

The Bocuse d’Or UK Academy brings together some of the country’s leading chefs to spearhead the campaign to see British food recognised as among the best in the world by having a UK candidate achieve a podium finish at the biennial Bocuse d’Or competition, a competition named after world famous French chef, the late Paul Bocuse. President of the UK Academy is Simon Rogan whose two Michelin star restaurant L’Enclume in Cumbria ranks first in the Waitrose Good Food Guide scoring a perfect 10. Chairman of the Academy is restaurateur Andreas Antona of the renowned Michelin starred restaurant Simpsons in Birmingham and The Cross at Kenilworth. The team’s technical director is John Williams MBE, Executive Chef of The Ritz London. The Academy is further supported by a number of high-profile ambassadors who are some of the UK’s leading chefs.

Paul Dickinson, Fuller’s Director of Food said, “At Fuller’s, we are thrilled to partner with the Bocuse d’Or UK Academy. The chefs who make up the Academy rank among the best in the world. Fuller’s chefs going through the Fuller’s Chefs’ Guild, from apprentices to Executive Chefs, will have a unique opportunity to benefit from the guidance and wisdom of these industry legends. In turn, we can expect to meet and exceed our customers’ growing expectations for delicious, seasonal food created by highly trained and experienced chefs. Reflecting Fuller’s commitment to food, the partnership also makes Fuller’s the obvious choice for young people who seek high quality training for a rewarding career in professional cooking.”

Simon Rogan, UK Academy President said, “The UK Academy is hugely excited to partner with Fuller’s, an iconic British brand, in pursuit of the goal of getting a British chef on the podium for the first time at the Bocuse d’Or competition. Everybody knows there’s a chef shortage in the UK right now and we applaud Fuller’s commitment to training chefs to bring people into the industry and raise the standards of professional cooking – the chefs of the UK Academy are excited to be a part of that journey too.  Only through the support of the likes of Fuller’s can the UK get a candidate on the podium. We hope this partnership might even inspire a Fuller’s chef to apply for the opportunity to compete.”

Bocuse d’Or: Started in 1987 by world renowned chef Paul Bocuse, the Bocuse d’Or competition sees the very best chefs from around the globe come together every two years in Lyon, for two days of intense competition and a huge celebration of the culinary arts. More than 60 countries enter the competition and a semi-final reduces this number to 24 who go on to cook in Lyon. These chefs from around the world – among the most promising talents in their generation and country – are tasked with preparing two recipes in 5 hours and 35 minutes precisely, live and in front of an enthusiastic audience of five thousand people. A panel of judges composed of some of the most accomplished chefs in the world score every dish to determine the winner. The UK has been represented in the final in every year since inception and achieved a best result to date of fourth place.