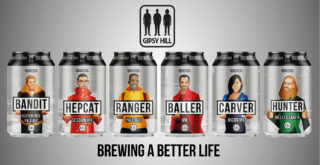 The brewery, which recently completed an ambitious expansion project to double its production capacity to 25,000hl per year, has taken the opportunity to increase its number of permanently available beers to six, while also undertaking a refresh of its core brand values and visual identity.

The refresh seeks to reflect the brewery’s commitment to inspiring people to make better choices, and to encourage aspirational living both inside and out of the beer bubble, while four previously limited releases are to become permanent fixtures in the Gipsy Hill core range line up.

“Five years, and 700 brews, down the road and we figured it was time to take a moment, look back and reflect for a second on where we’ve come from, then think about where we’re going,” said Gipsy Hill Co-Founder Sam McMeekin.

“Gipsy Hill was born out of family. It was cobbled together by a few guys who needed something meaningful in our day to day, because time away from our new, young families had to mean something. That’s the blood that flows through our veins. Family, our team, our passion for making the best beer we can and our desire for what we do to stand for something.

“That means treating people right. It means investing in quality equipment. It means getting better at what we do everyday. It means holding our suppliers to the same standards and treating our customers with respect.”

The new core range, all of which will be available in keg and 330ml can format, features a mixture of old Gipsy Hill stalwarts and new and improved recipes for previous specials. As part of the refresh, the brewery’s flagship ‘Beatnik’ Pale Ale has been reincarnated as ‘Bandit’ and is now certified as gluten free according to EU regulations (the finished beer contains less than 10mg/kg of gluten).

In keeping with the brewery’s distinctive visual style, each of the core-range cans features a member of the Gipsy Hill team, designed by illustrator Marcus Reed. Each beer is designed to evoke the particular personality traits and interests of the featured member of staff, reflecting how they chose to enjoy their downtime outside of work.

“As part of our new range, you’ll see that our characters are much more prominently featured,” McMeekin added. “Part of promoting who we are and what we’re doing is wrapped up in our team and celebrating them. They’re the backbone of what we do here. Their likenesses are featured on the can, and their passions are engraved into the background of each design.”

The full core range is as follows:

Carver (Micro IPA, 2.8% ABV) – We took everything we love about IPAs and brought down the ABV. Loaded up with a big New England grist, and fermented through with Vermont yeast, Carver has got balance, tropical aromas and a smooth juicy taste. Featuring Alice, our Sales whizz. She likes far flung adventures.

Hepcat (Session IPA, 4.6% ABV) – Our mainstay and our original, this fruity, juicy and bright tasting Session IPA is everything we think the style should be. Featuring Marcus, our Designer, illustrator and friend. He likes expensive jackets and colouring in.

Hunter (Helles Lager, 4.8% ABV) – An uncompromised lager. Unfiltered, with a light bitterness and spicy/bready undertones. Made with all premium malts and noble hops. Conditioned for 40 days. Featuring Simon, our Head Brewer. He likes beaches and wild windy days.

Baller (India Pale Ale, 5.4% ABV) – A big punchy, juicy hop bomb. We took everything we’ve learnt about making IPAs and put it into this beer. Bright flavour, huge aroma and a smooth body, it’s our go to IPA. Featuring Charlie, our Co-Founder. He likes city life and fast peddling.

The new beers and branding will officially launch at a series of Tap Takeover events around the UK at venues including: The Gipsy Hill Taproom (London), Northern Monk Refectory (Leeds & Manchester), The Free Trade Inn (Newcastle), and Salt Horse (Edinburgh). Two members of The Gipsy Hill team will be in attendance at each venue (full details TBC) to launch the new core range on October 11th.

Gipsy Hill Brewing Co was founded by Charlie Shaw, Sam McMeekin and Simon Wood in 2014. Nestled at the base of Gipsy Hill, in South London, it is one of London’s largest independently-owned breweries, set to produce 13,000hl (2.28 million pints) of beer in 2019.

In 2016 the brewery opened its first bar The Douglas Fir in Anerley, which it continues to operate alongside it’s on-site Taproom in Gipsy Hill. The Taproom, which opened after a successful crowdfunding campaign in 2018, was designed specifically with accessibility and inclusion in mind – a quarter of the bar is lowered, allowing wheelchair users to be served at an appropriate height.

As well as selling beer all across the UK, Gipsy Hill Brewing Co exports its products to eleven countries around the world, including Lithuania, Norway, Ireland, Denmark, Australia, Spain, France, Italy, Sweden, Switzerland, and The Netherlands.

Today, the brewery employs 35 people and is renowned for its commitment to beer quality, support for its community and exciting one-off special releases.