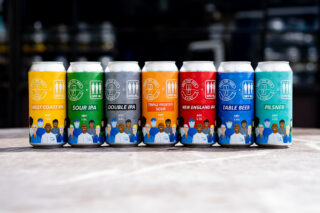 Independent craft brewery Gipsy Hill has announced its next set of specials, themed around the national campaign to support NHS staff.

Last month the South London brewery was among 12 breweries from across the UK to team up in support of NHS workers fighting the Coronavirus crisis. The “Buy The NHS a Pint” campaign allows drinkers to pay a pint forward to NHS staff, which can be redeemed in their respective taprooms after the outbreak has subsided.

Now, the brewery has revealed seven new beers in support of the initiative. For every mixed twelve pack sold through the brewery’s online shop, the brewery will donate £5 to the campaign, and for every case sold direct to trade customers, it will donate another £5.

The money raised will be forwarded on to the Gipsy Hill Brewery Taproom. Once the bar has been given the green light to reopen, NHS worker or volunteer will be able to come in, show their ID and redeem a drink on the house.

Speaking about the new beers, Gipsy Hill co-founder and managing director Sam McMeekin said: “The reaction to our Buy The NHS a Pint scheme so far has been incredible. To date, over 1,000 pints have been donated from our webshop alone.

“Having started the initiative wanting to make a small gesture to support the NHS, we’re now in a position to be able to giveaway a thousand pints once we reopen our doors, all thanks to your support.

“With a number of beers in tank when the crisis hit, we decided to dedicate our next set of releases to further promoting and supporting the scheme. Today, we’ve got seven delicious new beers ready to be released, all themed around the Buy The NHS a Pint campaign.”

“By buying the beers, you’ll not only be supporting a small independent business, you’ll also be helping us give even more pints to NHS workers when we reopen our taproom.”

The new beers are as follows:

This is our West Coast-style IPA. It’s hopped up with Amarillo, Simcoe and some big C hops (Cascade, Centennial and Columbus) for maximum old school IPA vibes, mixed with modern notes.

This Sour IPA is a huge glass of fruit juice. Sweet, tropical and sour. It’s a big, fruity IPA, hopped with Mosaic, Simcoe and Lemondrop and then blended with our house sour until perfectly balanced. It’s a brunch beer with punch.

This Double IPA is full of Mosaic and Rakau hops from New Zealand. It’s fermented on our house yeast and is balanced, dank, and complex with big flavour.

Think tropical solero that melted straight into your glass of Berliner Weiss. This has all the punch of a ripe bowl of breakfast fruit, mixed with a super clean, super sour base beer.

Led with fruity German hop varieties (Mandarina Bavaria, Hull Melon & Blanc), mixed in with Mosaic and Ekuanot. It’s been fermented on our house yeast for big sticky esters, and finishes rich with a lot of nuanced, balanced flavours.

This is a refreshing, hoppy little table beer. Hit with Cashmere, Azacca and Mosaic in the dry hop, it’s got a lot of flavour and clean, refreshing balance.

This Session Pilsner has a clean grist, traditional yeast, and new and old school German hops of Hersbrucker and Mandarina Bavaria. It’s clean, easy and full of flavour.

The beers will be available in 440ml can format, and will be sold a series of different mixed 12 packs from the brewery’s online shop.

For more information about the Buy The NHS a Pint scheme, head to https://www.buythenhsapint.com/

Gipsy Hill Brewing Co was founded by Charlie Shaw and Sam McMeekin in 2014. Nestled at the base of Gipsy Hill, in South London, it is one of London’s largest independently-owned breweries.

In 2016 the brewery opened its first bar The Douglas Fir in Anerley, which it continues to operate alongside its on-site Taproom in Gipsy Hill (although both sides are currently shut due to COVID-19). The Taproom, which re-opened after a successful crowdfunding campaign in 2018, was designed specifically with accessibility and inclusion in mind – a quarter of the bar is lowered, allowing wheelchair users to be served at an appropriate height.

In 2019, the brewery completed an ambitious brand refresh, increasing its number of permanently available beers to six, while also undertaking a refresh of its core brand values and visual identity.

As well as selling beer all across the UK, Gipsy Hill Brewing Co exports its products to 14  countries around the world, including Lithuania, Norway, Ireland, Denmark, Australia, Spain, France, Italy, Sweden, Switzerland, and The Netherlands.

Today, the brewery employs 40 people and is renowned for its commitment to beer quality, support for its community and exciting one-off special releases.