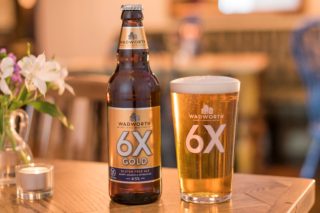 Wadworth’s gluten free and vegan beer 6X Gold has received a stamp of approval from The Vegan Society awarding it the Certificate of Registration Vegan trademark.

6X Gold was originally brewed as gluten free and went vegan in 2018.  The beer was certified by Coeliac UK in 2017 and has also won the Taste of the West awards and achieved Bronze in the International Beer Challenge.

6X Gold is brewed using Caramlat, Pale Ale and Munich malts with Flaked Barley and Pioneer, Admiral, Cascade and Pilot hops. Gluten derived from the barley is removed during the brewing process. The beer is hoppy and refreshing with sweet malt and spicy notes on the palate and has a zesty citrus aroma.

Wadworth is a regional pub operator and family brewer, with over 200 pubs across the South West of Britain. Founded by Henry A Wadworth, the business passed to his founding partner John Smith Bartholomew and is now in the fourth generation of management by the Bartholomew family. Wadworth has brewed beer at its Victorian brewery in Devizes, Wiltshire, since 1875, and is one of the few remaining family brewers to deliver to the local area using shire horses. The estate is split between tenanted and managed pubs and Wadworth works hard to ensure that its pubs offer a warm and welcoming atmosphere, excellent quality food and drink including its sought after brand 6X.  For more information visit: www.wadworth.co.uk