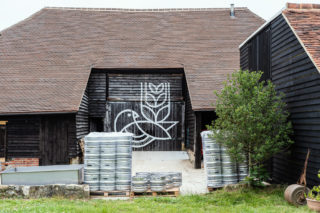 The Sussex-based brew house is nearing completion of its latest expansion phase by revamping a 17th Century barn into a state-of-the art brewing complex, allowing it to produce up to half a million litres per year.

The year-long transformation has seen the opening of an onsite brewery tap, which served its first pint on Friday 7th February, as punters gathered around firepits to watch the sunset over the stunning countryside.

The occasion was marked by the creation of a limited-edition beer in collaboration with Manchester’s Marble Brewery, mashed-in a matter of hours before the doors opened.

The brewery currently produces a core range of four modern craft beers, a Pilsner, a Pale Ale, an IPA and a low AVB Pale, available in can and keg. In addition, a monthly range of experimental and classic-style limited-edition brews, plus collaboration projects with some of the most existing breweries in the UK, complete the varied line-up of beer*.

“It has been an epic journey so far and we’re committed to our vision of brewing the beer we love, that’s better for the world we love. Good Things is now primed and ready for next chapter and we have an unbeatable team in place that will help crank things up a notch and take our beer – and our vision – to more people.”

Following its launch in 2017, the brewery has gone from strength to strength thanks to consistently good, flavourful brews and its sustainable roots. This latest move will see Good Things realise its vision of becoming a closed loop brewery – meaning it will operate in a fully sustainable manner.

100% powered by solar panels neatly tucked behind the brew house, the brewing process starts with water bored from a 96 meter well onsite and ends with delivery via a fleet of electric-only vehicles.

The spent grain from the brewing process is put through a dehydrator invented (and patented) by the brands founder, which dries the grain overnight, using only green energy. The grain passes through the onsite flour mill to create a ‘00’ grade flour that’s higher in protein and fibre, and lower in carbs and calories.

A reed bed is currently under construction which will mean that waste can be treated on site, before being released back into the surrounding land and streams, ready for the process to begin over again.

Good Things Brewing Co was founded in 2017 by Chris Drummond, born out of a vision to create modern beer, true to style, with sustainability at the core. Based in a converted 17th century barn in the South East of England, Good Things is a closed loop, fully sustainable business. They use water bored from an on-site well, gather 100% of power from solar energy and turn all spent grain into flour using an on-site mill. All deliveries are made using fully electric vehicles.