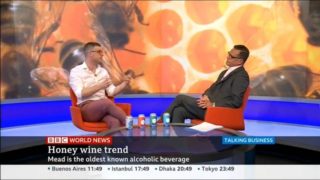 Mead – the next craft trend

Tom Gosnell, who founded London’s only meadery in Peckham in 2014, took to the screens of BBC World News’ Talking Business last week in front of 101 million viewers.

Interviewed by presenter Aaron Heslehurst, Tom Gosnell talked of the burgeoning rise of mead, especially in the last 12 months. This had already led to agreed sales contracts during January, which will more than triple his export sales in 2020, with a significant thirst for his meads in Asia, and opening up sales in France and throughout every state of America.

Part of Gosnells success has been in modernising the word ‘mead’, aided by the launch of four canned meads at 4% abv last autumn and the January 2020 launch of Gosnell’s LOW ALC in can at 0.5% abv.

Tom Gosnell developed his obsession with mead in the US, where there are over 500 meaderies producing a wide range of flavours and alcohol levels.  This has grown from a mere 30 commercial US meaderies in 2003, while mead in the UK is beginning to buzz.

Tom Gosnell comments: “There is such a groundswell of interest in mead. In America, there are over 500 meaderies, and they are producing some really out-there flavours, which reflect the wide variety of plants from which bees create their honey.

“Our intention is to show the versatility and elegance of modern meads. Mead is the world’s oldest drink, far older than wine or beer; and we are going to build on that heritage to enter new markets with an exciting range of styles and strengths.  We are finding a new place for ourselves in bars, pubs, restaurants and the home – where bees formerly feared to tread.”

Gosnells partners with honey producers from London for Gosnells postcode meads, and with honey producers in Spain and mainland Europe for the orange-accented 5.5% Classic in its smart 75cl bottle. Tom introduced Aaron to a taste of his new 4% abv cans: Sour; Citra Sea (with Citra hop and salt); pink Hibiscus; and Hopped.