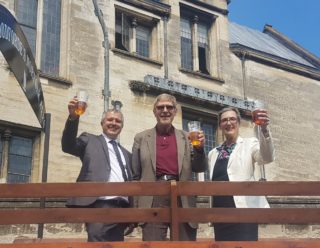 In 2011, Dawn Leeder from PintPicker and Phil Cutter of the Murderers pub founded Norwich City of Ale. The event revolutionised the traditional idea of a beer festival by taking place across multiple venues – and lasting more than a week. It has since gone from strength to strength, cementing Norwich’s reputation as a top place to visit for great beer and pubs.

Other cities have followed suit, creating their own beer weeks and festivals. This presents a host of opportunities for collaboration, as Dawn has identified. Norwich City of Ale and Sheffield Beer Week have struck up an alliance and will be holding joint events at their respective festivals for the first time this year.

“The next step,” says Dawn, who has travelled around visiting the cities and meeting the organisers, “is a forum to see how much more can be achieved by joining ranks. To that end, Norwich City of Ale has set up a national forum for Beer Cities.

“We can share experiences and learn from each other. If we then work together to promote Britain as a Beer Nation and our cities as Beer Cities, the impact could be enormous.

“There’s potential to stimulate a significant amount of tourism. This is great for pubs and breweries, and helps prevent the degeneration of city-centres that started with out-of-town supermarkets and online shopping.”

Organisers of Norwich City of Ale have been awarded a Brewers’ Education & Research Fund grant for the inaugural British Beer Cities’ National Forum. It will take place in October in Norwich.

“We are extremely grateful to the Worshipful Company of Brewers for the grant,” says Dawn. “It has enabled us to put together a meaningful programme and invite some of the most influential people in the tourism and beer industries – as well as the Beer City / Beer Week organisers.”

“Festivals and Beer Weeks give a great incentive for people to visit at a particular time – but the impact isn’t limited to the event itself. Visitors know about, and come to experience, our City of Ale all year round.”

Frances Brace, a director of the British Guild of Beer Writers, who is involved in the Beer Cities project adds, “Breweries, beer and pubs make a huge contribution to the economic and social life of Britain. They have done for centuries. They are part of our history, our culture and our communities. About time we worked together to make more of them.”

The Forum will involve fourteen cities and towns that followed in Norwich’s footsteps by setting up their own Beer Weeks. It will also be of interest to other people wishing to make their own towns and cities famous for their breweries, beer and pubs. Many of the country’s top beer writers, including Roger Protz and Adrian Tierney-Jones, will be attending, as will tourism chiefs, directors of pub and beer organisations and CAMRA national and regional representatives.

“As the original City of Ale, Norwich is the obvious place to host the inaugural meeting,” says Dawn, “but the benefits will be to all the participants. Beer is our national drink and an important part of our national offer. The Forum’s conclusion will surely be to promote Britain internationally, through its beer cities, to beer lovers around the world.”