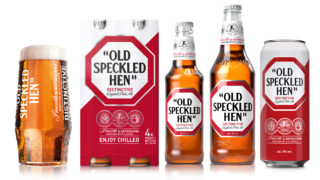 Under the partnership, Greene King will now exclusively supply all beer and lager products to the Royal Albert Hall. They have worked together since 2016, and Old Speckled Hen is the Hall’s official beer, with its own fully-branded bar inside the venue’s Dangoor Porch and Foyer at Door 6.

The Royal Albert Hall was opened by Queen Victoria in 1871, in honour of her late husband Prince Albert. It now hosts around 400 varied performances each year in its main auditorium, from classical music and rock and pop gigs to dance, tennis and Cirque du Soleil, and more than 1,000 events in its other spaces.

Craig Hassall, CEO of the Royal Albert Hall said: “Our association with Greene King has been a creative and productive one. We are really pleased to see this develop into such a strong partnership. The Greene King stable of products is unrivalled in the beer industry and we could not imagine a more fitting British partner. We are especially pleased that Greene King has stepped up on the eve of our 150th anniversary celebrations in 2021.”

Matt Starbuck, managing director, Greene King Brewing & Brands said: “We are thrilled to be appointed again as exclusive drinks supplier to Royal Albert Hall. The venue represents the very best of British culture from its beautifully distinctive Grade I listed building to the breathtaking array of performances it hosts every year.

“Our Old Speckled Hen brand, the UK’s number one premium ale, is known for its quintessentially yet quirky Britishness, and so is a perfect fit for the inquisitive, forward-looking audiences that visit the Royal Albert Hall. The venue welcomes approximately 1.7 million visitors a year, so keeping its numerous bars running smoothly is a huge undertaking – we are proud to have been appointed as partner to support the team at the Hall in this task.”