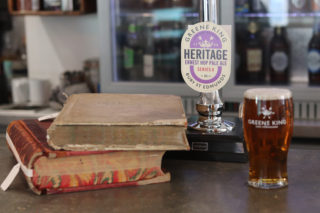 Heritage Ernest Hop Pale Ale, a 5% abv pale ale, follows Heritage Suffolk Pale Ale and Heritage Vintage Fine Ale which were released into market in January 2018. All three premium ales have drawn influences from Greene King’s brewing heritage and have been based on historic recipes from the brewery archives.

Heritage Ernest Hop Pale Ale is brewed with English hop, Ernest, which was first bred in 1920s but never commercialised. Grown now in Herefordshire, it is considered new world in style for its wild fruit-centric flavours, in stark in contrast to traditional, more floral, English hops.

Speaking about the beer Ross O’Hara, Greene King Head Brewer said; “It has been a privilege to develop the Heritage Series of beers, delving into archived recipes for inspiration.  What is so exciting as a brewer, is that had it not been for the fact that Ernest was discounted for its citrus flavours nearly hundred years ago, then we could have been drinking beers akin to modern day new world style craft, way back then.”