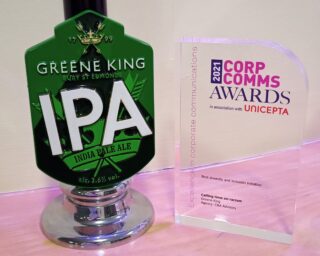 Greene King has won a prestigious award in recognition of its work to promote diversity and inclusion and become a truly anti-racist organisation.

The CorpComms Awards 2021 awarded Greene King the prize for best diversity and inclusion initiative for its action plan titled ‘Calling Time on Racism’.

The CEO-led race diversity strategy aims to drive change not just at Greene King but across the hospitality industry, setting out a series of commitments to increase the representation of Black, Asian and minority ethnic colleagues.

The strategy was created as part of a comprehensive response to the fact that the company’s founder Benjamin Greene, after handing over the brewery to his family, went on to profit from Transatlantic slavery in the 1800s and argued against its abolition.

Greene King’s corporate affairs director Greg Sage said: “While we can’t change what happened 200 years ago, we are determined to use our position as an employer of 40,000 people to affect what we do now and for the future.

“We are delighted to win this award and see our early work recognised. We know there is still much more to do and our journey to becoming a truly anti-racist organisation is only just beginning. Actions speak louder than words and so we spent time listening to our colleagues, customers and wider stakeholders and coming up with a detailed, target-led initiative that we will work towards over the next few years as we strive to create meaningful change in our company, our industry and wider society.”

Full details of Greene King’s Calling Time on Racism plan and the commitments it makes can be read here.

Some of the actions undertaken already include:

·       Launched a reverse mentoring programme where every member of Greene King’s executive board is now assigned a mentor from Black, Asian and minority ethnic backgrounds, to see just how diversity and inclusion impacts on team members at all levels and across all divisions in the business

·       Pledged a new five-year agreement with the Prince’s Trust, where funding was increased by a third and invested in projects to raise the percentage of young people from BAME backgrounds Greene King employs through the charity from 24% currently to 40% by year five

·       Chairing an industry group through the British Beer & Pub Association to drive equality, diversity and inclusion in the hospitality sector and work collaboratively to share best practice

·       Launched a new Employee Led race diversity group, called ‘Unity’, to sit alongside two existing groups in Greene King – an LGBT network and a Women’s network – and promoted it extensively in our internal communications to boost awareness and membership. The group has a sponsor from our Executive Board who attends meetings and acts as a contact between the group and overall business direction

·       Launched a partnership with Women in Hospitality, Travel and Leisure’s Inclusive Leadership programme including sponsoring a series of webinars. Greene King’s CEO Nick Mackenzie now sits on the group’s advisory board