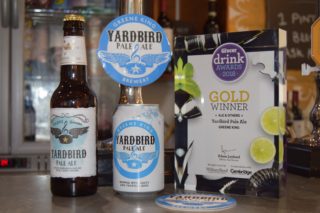 Greene King’s Yardbird Pale Ale has been named the best ale at the Grocer Drink Awards 2018 winning the gold award in the Ale & Others category.

Yardbird Pale Ale was crowned champion in the highly sought after category after rigorous blind tasting carried out by independent experts. The Grocer Drink Awards, run by the industry bible The Grocer, celebrates outstanding achievement in branded and own label products in the alcohol aisle and is the premier event for promoting outstanding quality in off-trade drinks.

The 4% abv pale ale was first introduced as a seasonal ale in pubs and proved so popular it soon became a permanent fixture. It is now available in bottle and can format throughout supermarkets and other off trade too.  Yardbird Pale Ale takes its inspiration from the freedom and energy of American jazz and is named after legendary jazz saxophonist Charlie Parker, nicknamed ‘Yardbird’ or ‘Bird’ for short.  The pale ale is brewed with American hops Citra, Centennial and Simcoe, giving it a zesty and tropical aroma. Citrus flavours entice the taste buds and result in a clean bitter finish, leaving you wanting more.

The Grocer operates a unique two-step judging process which puts products in front of consumers, whose scores are weighted geographically, demographically and ideologically, as well as expert judges including buyers, brewers, journalists and distillers from across the industry.

Speaking about the win Matt Starbuck, managing director, Brewing & Brands said: “This is a hugely prestigious award and one we are delighted to win.  Ale is a fiercely fought category and so it is all the more pleasing that Yardbird Pale Ale would have been judged alongside some of the best beer brands on the market in expert blind tasting conditions. The fact that it has been crowned the champion ale is testament to our exceptional brewing team who work so hard to create beers that get talked about and are highly drinkable.”

Best described as a light hearted, free spirited beer full of swing, Yardbird Pale is now available in 500ml bottles and 330ml cans where it can be purchased in selected Tesco stores or online at www.greenekingbrewery.co.uk