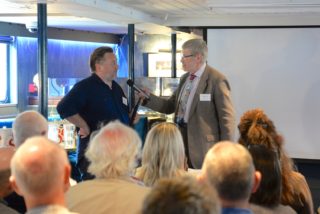 The British Guild of Beer Writers staged its traditional Summer Party on the eve of the Great British Beer Festival, this year with an additional event to pay tribute to beer writer and Guild co-founder Michael Jackson, who died 10 years ago.

Held aboard the Tattershall Castle, Stonegate Pub Company’s floating bar and restaurant moored at the Victoria Embankment, the party and earlier Michael Jackson tribute attracted some 130 guests, among them Guild members from the UK and abroad, brewers, MPs and others within the beer industry.

Beer writer Roger Protz led the tributes to Michael Jackson, who, he said, “has done more than any other writer to put beer on the map and to bring it to the attention of a wider audience.”  After showing a clip from The Beer Hunter, Jackson’s TV series from the 1990, Protz interviewed a number of guests who had known the great man, or whose work had been influenced by him.

Tributes and anecdotes came from licensee Mark Dorber, beer writer Matt Curtis, Belgian broadcaster and writer Ben Vinken and Fuller’s PR manager Georgina Wald. Garrett Oliver of Brooklyn Brewery and Mme Rose Blancquaert of Liefmans Brewery both delivered their homage via a short film, while to end the event, Pete Brown – like Jackson, a Yorkshireman –  read aloud his last piece of writing, from 2007.

Protz said, “It was wonderful to gather together so many people who cared about Michael and share our memories of him to mark the 10th anniversary of his death. What shone through all the tributes were Michael’s eloquence – in speech and on the page – his humanity and his sense of humour. I, like so many in the room, feel privileged to have known him.”

A number of the Guild’s brewer members showcased new beers at the party, including: Adnams, Brains, Greene King, Hook Norton, Shepherd Neame, St Austell and Wadworth, as well as a number of US brewers represented by the Brewers Association. Two of Michael Jackson’s favourite beers,  Fuller’s Chiswick Bitter and Batemans XB, were also donated.

Guild chairman Tim Hampson said, “Our Summer Party grows in number every year, as the Guild’s standing grows not just in the UK, but also further afield – just this month we have recruited new writers and communicators from the US, Canada and Belgium and our membership now stands at 250 individual members.

“Holding the Michael Jackson tribute added a different dimension to this year’s event, reminding us all of the extraordinary power that great writing can wield in raising awareness. He would, I know, be enormously proud of the Guild’s success, just as we are proud to be carrying on his legacy of bringing beer to a wider public.”

Membership of the Guild of Beer Writers is open to all who communicate about beer, with Full and Associate levels available to individuals, and corporate membership open to brewers, brand owners, pub operators and suppliers to the industry. For information or to apply, visit https://www.beerguild.co.uk/about-us/join/