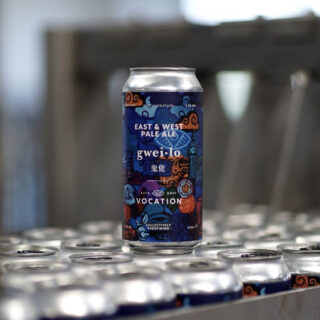 The Hong Kong Brewery will see its beer available in 300 Morrisons stores later this month.

The beer is a collaboration with Vocation Brewery, Gweilo Beer’s brewing partner here in the UK, and was the first beer released last year to celebrate its arrival in the UK market.

Co-founder of Gweilo Beer, Ian Jebbitt says – “East & West embodies our unique partnership with Vocation and we’re delighted Morrisons have decided to include it in their next guest rotation, showing our beer and Szabotage’s artwork to everyone across the U.K.”

The beer is a 5.7% vegan-friendly pale ale, featuring a soft, hazy base, dry-hopped with Galaxy and Vic Secret, imparting notes of ripe papaya, guava and pineapple, leading into a dank flavour profile on the finish.

East & West Pale Ale will be available as a guest ale in 300 Morrisons stores from 22nd September to 9th November 2021.

Gweilo Beer launched in 2015 and has been redefining the essence of craft beer ever since – what it tastes like, how it’s brewed, and where it’s enjoyed. They believe beer should be easy to drink and fun to share – which is why they’re constantly exploring new flavours, concepts and collaborations to keep things interesting.

Gweilo hails from Hong Kong, and just like the streets of the city, their beers are bright, exciting and inviting. But while they keep things light and breezy, make no mistake: they’re sticklers for quality. From packaging to processes, they maintain exceptionally high standards – because, at the end of the day, they want to do their very best for you, and make every Gweilo experience great.

Backed by a team of hard-working, fun-loving professionals, Gweilo has already found its way into many corners of the world and launched its Core Range in the UK in February 2021, brewed at Vocation Brewery, following a successful Limited Batch launch in December 2020, with four beers brewed at Fierce Beer.