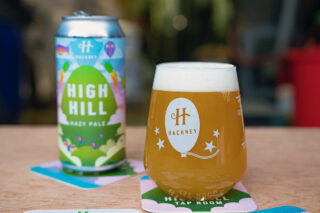 East London brewery will build a new brewery and taproom near Blackhorse Road – and is raising funds by offering customers twice their money back over the bar when it opens in March 2021.

To celebrate 10 years as a vital part of the London brewing scene, Hackney Brewery is expanding into a huge new site on the new Blackhorse Road Beer Mile.

The 7,500 sq ft site – christened High Hill – will be the home of the original brewhouse, a new beer hall and large outdoor seating area, with plans to expand the brewhouse and build a kitchen in phase two.

At the heart of High Hill will be Hackney’s first taproom with 20 direct draw lines of fresh beer in a uniquely Hackney Brewery environment – with Pete Fowler’s artwork and the welcoming and relaxed feel. As well as serving Hackney beers, there will be plenty of guest taps and fridge space dedicated to the brewery’s many friends in the industry. The large, sunny outside space will host plenty of revellers, as well as food trucks and a shipping container bar with more taps.

To fund the exciting expansion, founders Pete Hills and Jon Swain have decided to launch a Pay It Forward Scheme via crowdfunder.co.uk, offering drinkers the chance to put money behind the bar before it opens. In return for helping to fund construction, backers will get £2 for every £1 they put in – effectively doubling their beer money – as well as other merchandise and discounts. The brewery will also be releasing a limited edition hazy pale ale called High Hill to celebrate and spread the word about the raise, which goes live on Thursday 19th November at 9am.

Jon Swain says: “After ten years the thing we’re most excited about having our own taproom at last, serving our beer in peak condition. With that finally being possible we wanted to give something back to everyone who has supported us since 2011 and especially in the last year – that’s what the Pay It Forward campaign is really about.” Pete Hills says: “We’ve been looking for a site for a long time, but High Hill was worth the wait because the space is perfect for us inside and out. This is a huge step for us, putting us on a national stage while still remaining rooted in the London scene we love so much.

The Crowdfunder campaign will run until the 19th December, with High Hill slated to open in March 2021. It will be walking distance from several other excellent craft breweries, including Wild Card, Exale and Signature Brew.

Hackney Brewery was founded by Hills and Swain in 2011. Initially focusing on British ales with an American twist, the brewery rebranded in 2018 with the help of Pete Fowler and modernised its core range and seasonals to widespread acclaim.

To watch the Pay It Forward video and find out more about the fundraising go to
https://www.crowdfunder.co.uk/high-hill-taproom.