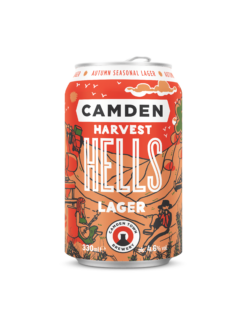 29th September 2020, London: Autumn is well and truly upon us, marking the start of Harvest Festival, a time to share with those in need, and the return of Camden Town Brewery’s autumnal twist on its Hells Lager, Harvest Hells in partnership with food redistribution charity, The Felix Project.

Drawing on the rich, malty flavours of autumn, Harvest Hells is the robust take on the all-weather Hells Lager. Full of flavour, the deep red lager is perfect for enjoying after a leafy park walk or cosying up with on a rainy Sunday afternoon.

Camden have teamed up with The Felix Project for the second year running, to help raise awareness of the millions of people across the UK experiencing food poverty, a problem which has been exacerbated by Covid-19, with people across the country struggling more than ever.

Over the last few months, The Felix Project has responded to the Covid-19 crisis by expanding its operations in order to reach as many vulnerable people in need. Since March, the charity has increased deliveries of surplus food to charities and schools from 10,000 tonnes to 26,000 tonnes based on demand from across the capital. They have already delivered the equivalent of 14 million meals this year to help people who are isolating, the elderly, the homeless, children, families and more.

To support the incredibly important work they’re doing in London, Camden Town Brewery are launching a ‘webshop can swap’ on the Camden webshop from 29th September to 4th October in the lead up to Harvest Festival. Featuring a selection of six food items on the website that consumers can add to their virtual shopping basket, each item bought unlocks a free can of Harvest Hells in exchange, with the value of all items going towards food donated to The Felix Project.

Following the virtual ‘can swap’, for every can sold of Harvest Hells during the month of October, Camden will donate 20p to aid the vital work The Felix Project does in providing nutritious food and healthy meals for those who would otherwise go hungry.

Jasper Cuppaidge, Founder of Camden Town Brewery said: “With Autumn comes the return of our Harvest Hells Lager for its second annual release. Harvest Hells has a darker, maltier taste than our classic Hells, making it perfect for these colder, crisp evenings at home.

We’re really glad to be working with The Felix Project for the second year running, as now more than ever the work they do is life-saving for Londoners who rely on food donations. The Covid-19 crisis has left many people out of jobs, turning to local food banks and the incredible volunteers at The Felix Project for support. We’re making a financial donation from every can sold in the first month to help aid the fantastic work they do to end food poverty in the city that our brewery was founded.”

Mark Curtin, CEO of The Felix Project: “We are delighted to be working with Camden Town Brewery again on this fantastic initiative that will help distribute increased quantities of food throughout London. Since lockdown the demand on our services has increased dramatically and we rely on the generosity of our supporters and partners to enable us to continue to operate on the increased scale required.”

For 2020, Harvest Hells has had a can makeover courtesy of illustrator Gaurab Thakali. Our 2020 Seasonal Design Collaborator’s music-inspired illustrations kicked off earlier this year with the summer Seasonal, Strawberry Hells Forever.

Harvest Hells has an ABV of 4.6% and is available now in the following:

For more information, images or samples please contact the team at pr@camdentownbrewery.com or lily.freeman@wcommunications.co.uk / 07885790727

In May 2020, Camden rebranded Camden Hells to Camden Heroes in support of Healthcare workers across the UK. All proceeds from sales of the beer were donated to NHS charities, and NHS workers were able to claim a 6-pack of the beer for free.

The brewery also launched a virtual pub called THE CAMDEN BRE.WWW.ERY BAR, which hosted a series of programmed entertainment including pub quizzes, live music, cookalongs and much more. All events aimed to raise money for Hospitality Action’s COVID-19 Emergency Fund.

Camden Town Brewery continued support for Hospitality Action’s COVID-19 Emergency Fund by hosting an auction on Twitter for the most valuable pint of Camden Hells ever poured, which was delivered (at a safe two metre distance) to one lucky beer fan’s front door. The pint sold for £800, which Camden matched and donated to the hospitality charity.

Finally, in July, the brewery created a one-off beer called ‘To The Pub’. The American Pale Ale was brewed to support and celebrate the pub industry in its time of need by giving them kegs of the beer for free.

About The Felix Project:

The Felix Project is a London-based charity offering a practical solution to the dual issues of food waste and hunger. We work with businesses to rescue food that is surplus – good quality, nutritious food that is in-date and safe – and deliver it free of charge to local charities and schools serving London’s most vulnerable communities. Our vision is a London where no one goes hungry and good food is never wasted. Founded in 2016 by entrepreneur Justin Byam Shaw, we are now London’s largest food redistribution charity. For every £1 donated, Felix delivers £12 worth of good food. We have already distributed enough food to make 14 million meals this year.

Finally, in July, the brewery created a one-off beer called ‘To The Pub’. The American Pale Ale was brewed to support and celebrate the pub industry in its time of need by giving them kegs of the beer for free.