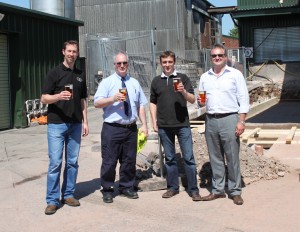 Having sustained year on year double-digit growth for over 5 years running, this year Wye Valley Brewery are making a £2m investment in expanding the brewery to keep up with growing demand for its beers.

This expansion will see the installation a complete new brewhouse. The design retains all the features of a traditional English brewery including using whole hop flowers. However, it will also incorporate some truly cutting edge features that will represent a quantum leap in terms of energy consumption and, therefore, sustainability. Furthermore, it will provide a much better physical environment for brewers and visitors alike.

The project is being delivered by British engineering firm, Microdat. They are teaming up with Watergate Construction for the second time on a brewery build having successfully developed Moorhouse’s in Burnley. Furthermore, the main brewing vessels will also be manufactured in the UK by a company called Musk.

“We underwent a lengthy evaluation of various potential suppliers and it is extremely heartening that we have been able to find top quality companies in the UK to carry out our expansion – contrary to popular belief British manufacturing is still very much alive” commented Head Brewer, Jimmy Swan.

As part of the ongoing expansion the brewery is also taking on an Engineering Supervisor, Hywel Davies. Hywel is a highly experienced electrical and mechanical engineer having done his apprenticeship at Bulmer’s in Hereford and also worked at Westons Cider. He will be a valuable addition to the team.

Wye Valley Brewery is a traditional, family owned, regional brewery, based in Stoke Lacy, Herefordshire. Founded by ex Guinness brewer Peter Amor, the brewery began in 1985 and in 2002 it moved from the old stable block of The Barrels, an historic 18th century Hereford coaching inn, to a much larger site in Stoke Lacy, where it is now recognised as the leading cask ale brewery in the county. In 2002 Peter’s son Vernon, took over as Managing Director. The brewery has grown every year since it was established and investment in the brewery continues with the installation of a new brewhouse in 2012.

Microdat’s continued investment in the latest technology and advanced engineering techniques, including robotics, has led to sustained progress in automated handling systems, chiefly for brewers, but also helping other sectors to improve productivity.