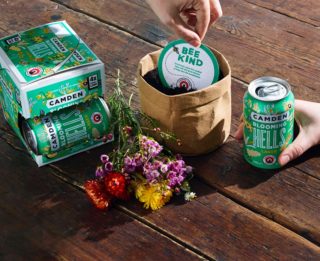 Spring is on the horizon, so at Camden Town Brewery, we’re getting ready for balmier weather and our latest seasonal beer, Blooming Hells. This limited-edition spring lager is inspired by British Springtime; come rain, shine and bloom.

Brewed using fruity southern hemisphere hops from New Zealand, South Africa and Australia, Blooming Hells is crisp and fresh with citrus and fruit-salad aromas – the perfect accompaniment to the season of Spring.

However, we wouldn’t have blooms for Blooming without British bumblebees. Over the last 80 years, bumblebee populations have decimated due to a reduction in wildflowers that they need for food and shelter.

So, we’re doing something about it by supporting the Bumblebee Conservation Trust. Every four-pack of Blooming Hells at your local Sainsburys contains a wild flower seeded beer mat you can plant in your garden. We’re also donating 20p to the charity from each can sold in March.

Tessa Brooks, Fundraising Officer of the Bumblebee Conservation Trust, said“We are delighted with Camden Town Brewery’s interest and enthusiasm to help the bumblebees with their new seasonal Blooming Hells lager. The UK’s food security depends on bumblebees’ pollination services, so the single most important thing we can all do to support them and save our native species is to grow bee-friendly plants. With Blooming from Camden, you can do your part, have a well-earned beer and ‘bee’ kind to the bumblebees all at once.”

Jasper Cuppaidge, Founder of Camden Town Brewery, has said: “Our Blooming Hells Lager is inspired by British springtime – meaning April Showers, flowers and fresh new hops. We’re donating 20p to the Bumblebee Conservation Trust for every can of Blooming Hells sold throughout March, and every 4 can fridge pack sold at Sainsbury’s will have a seeded beer mat to grow wildflowers, so everyone can help create an environment for Bumblebees to thrive in.”

Blooming Hells is the final instalment of our full seasonal variety by Seasonal Design Collaborator, Dutch illustrator Bodil Jane, following the fresh success of our Strawberry Hells Forever, Harvest Hells and Hells in Hibernation beers. The Seasonal range has given our brewery a great platform to shout about causes important to us and support amazing charities relevant for each season.

Blooming Hells has an ABV of 4.6% and will be available now in the following:

As with all of our seasonal lagers, Blooming Hells is here for a good time, not a long time. So, you best get busy, enjoy Blooming Hells and sow seeds for the bees.

Camden Town Brewery’s core range consists of five beers including its award-winning Hells Lager and the brand’s latest launch – Off Menu IPA. These beers are available in all major supermarkets as well as around 3,000 pubs, bars and independent retailers.