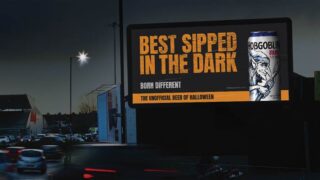 Considered by many as the original craft beer*, Hobgoblin is Britain’s third biggest selling Premium Bottled Ale, and will this year be activating a Hobgoblin campaign like no other.  For Halloween 2020, Hobgoblin is revealing interactive UV/ glow in the dark murals in London, taking advantage of the earlier day transitioning into night. This is supported with out of home executions in city centres across all key regions – Birmingham, Leeds, Liverpool, and Manchester – and targeted social advertising to provide national reach.

“Consumer spending on Halloween has almost doubled since 2013 to become the second biggest drinking occasion after New Year’s Eve, and the third most popular retail event after Easter and Christmas. 77% of millennials spend specifically on Halloween, and it over indexes with females.  49.5 million pints of Hobgoblin has sold in the UK in last 12 months, and during lockdown the beer has delivered phenomenal growth, proving its status as a trusted national brand.  This Halloween we’re really going for it in true goblin fashion, to excite existing Hobgoblin drinkers and to reach out to the unconverted.”

The Hobgoblin campaign will also build on the worldwide success of Hobgoblin’s ‘Ant Vermouth’ cocktails of 2016 by hosting a four-course ‘Best Sipped in the Dark’ dinner at acclaimed Pidgin restaurant in London’s Hackney.  Restaurateur James Ramsden has created a Halloween Week Menu that is full of surprises – pairing the four Hobgoblin beers with bespoke dishes including:

In addition, ‘Hobgoblin Beer and Bugs’ Snack Packs will be available to purchase online from the Hobgoblin shop with:

HOBGOBLIN IPA: Peri Peri Crickets. A combo for a deep chair and a roaring fire